Down Through The Rocks

I sure do approve of Fridays.  At 4:00AM, I’ve a call that finishes.  I know I’ve written about this before. Perhaps it was seven days ago.  But when that call is done, I can exhale.  I go and sit on the floor and meditate, daring myself to slip back to nod. Exhale again.  Focus on the breathing.  Focus on numbers.  One to ten.  Start again.  Let that thought go. It is always the most mysterious way to fly through thirty minutes, because that time is now, gone as I check my watch.

I stretch my legs at the end of my meditation.  I’m already on the floor.  And you would not believe how fast you can count to thirty: “one two threefourtwentynine . . . thirty” before releasing oneself from a painful stretched position.  Breathing slows you down.  You have spent thirty minutes establishing a rate of breathing.  So it’s best to use that cadence, rather than some hyper-speed cerebral stopwatch.  Breathing can only go so fast, marking second-count you're supposed to obtain with that position held.

My wife’s up early.  The coffee is ready and she’s out in the garden looking at her Trumpet Vine.  There is a main trunk of the vine that dominates the trellis. But here and right there and seemingly all around there are off shoots that stick up.  My dad rolls down the driveway at 8:15AM, right on time.  He and I will, for the fourth Friday morning in a while now, head out to some place near by and enjoy a good hike.  He’d suggested the Awosting Falls up in the Gunks, and though I’d initially drafted a note to reply, “Yeah, but I’d visited there seven years ago,” it seemed ill-considered.  Why not head up and have a look. 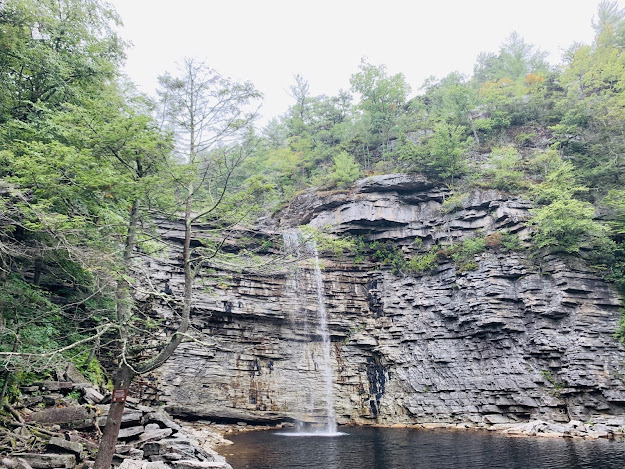 Glad I did.  It is, of course, astoundingly beautiful and enough to make someone rather interested in geology.  This water falls down through the rocks of millenniums'-squared.  Are those all layers of history, that mirror the tree-ring view down into the Grand Canyon, or was this just a singular thrust up, a solid co-temporaneous gesture that the water now cuts through revealing nothing more than the view into one big block of rock?  We don’t know. 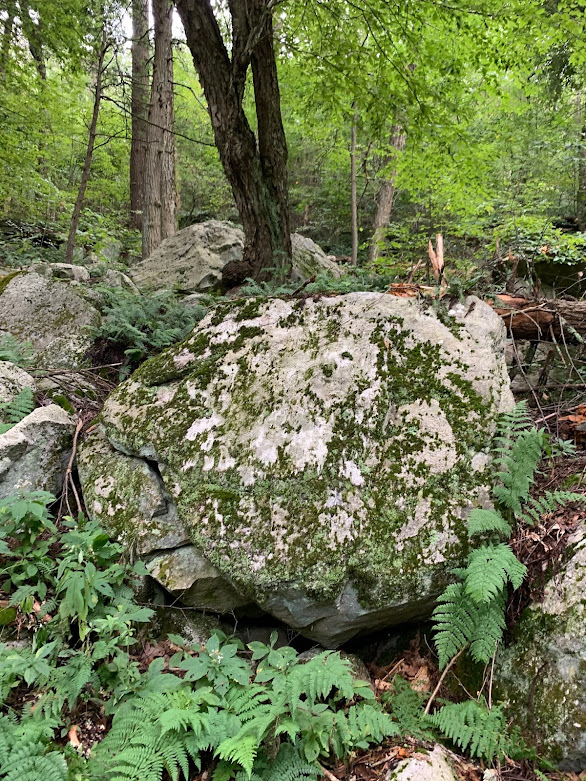 Looking at this exceptional scene, I suddenly got nostalgic for China.  Scenes of profound natural beauty are necessarily populated with three millennium’s worth of visitors who documented their visits. .  These falls have had visitors for the same amount of time.  But it just so happens that they only started writing about it a few hundred years ago.  We’re the first two folks out on what is otherwise usually a crowded trail, and we stop over and over again and comment on how beautiful the gesture of a clasping tree or a stone frozen in motion is.