In the Largest Concentration

Palisades Park .  You ever been there?  I have’t been in the vicinity since I was a few month’s old, but today when I was out on the porch, reading the second third of Claude McCay’s “Banjo” traipsing the Corniche and the Ditch of Marsaille, my daughters came out to the porch and wanted to talk.  “So . . . per the notion of going to New York” for the younger one’s birthday.  They wanted to know if today should be the day.  The luxurious morning I’d envisioned before me with all the many thing that would move over to the ‘done’ column, evaporated suddenly.  “Oh.  Today?  Right.  I thought you meant next week.

I’d had it in my mind to take my younger one down to Palisades Park one day soon.  She is, as loyal readers know, obsessed with all things Korean.  We went down today and agreed to do her Manhattan visit next weekend.  This will mean going down the Palisades Parkway.  I thought of views, never realized, driving along this hundred year-old Parkway and found “State Line Park,” occupying the border of the two States, looking down on my old home-borough of Westchester.  We stopped there after two consecutive Parkway U-turns, and got a kick out of the views, and then promptly continued on our way. 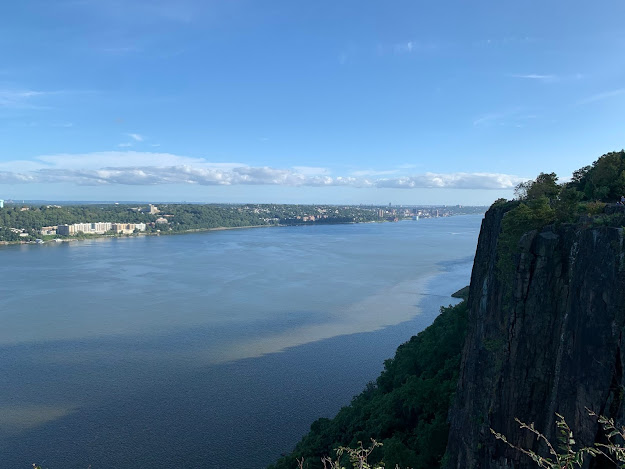 Palisades Park is community in the shadow of the anchoring western tower’s of the George Washington Bridge.  It is composed of different ethnicities, sixty five percent of which are Korean.  That is not a minority.  Our destination is Broad Avenue, where, according to the web, there are many, many restaurants of note.  My younger one practices reading the many, many Hangol signs.  One loop around the block and we have a parking place near to the restaurant we identified as the high-probability Bulgogi-joint for us, here in the largest concentration of Koreans in the Hemisphere. 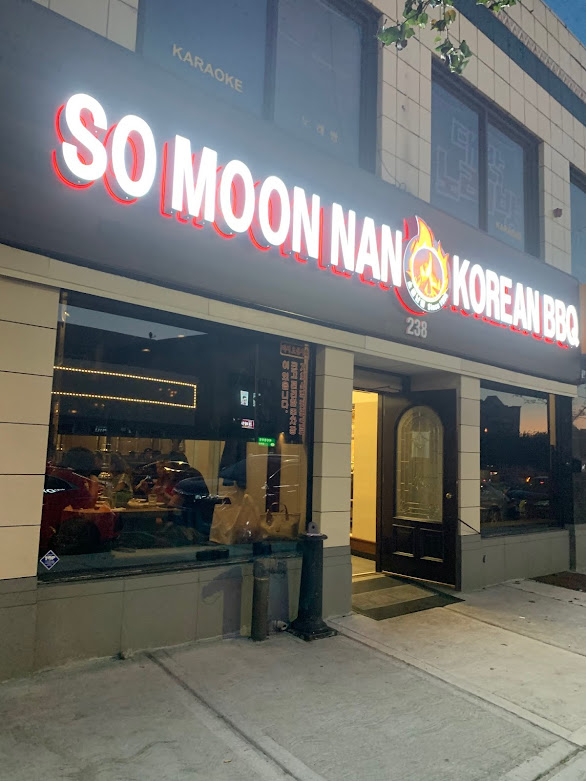 So Moon Nan!  Recommended.  Yes, they were open.  Yes., the had outdoor dining.  Yes, we can have a table now or later.  And it all unfolded rather dreamlike.  The bulgogi was delicious.  So was the pork.  The vegetarian had enough to keep her content as well.  The Sushi types were limited but what they had was fresh.  And all those wonderful fix-ins there on the table, as our Korean friends generously tend to provide.  I, who fast for four days a week was mighty glad to be there on a day when the “on” switch was flipped hard right.  Yes.  And  Yes.  We’ll take the pancake and the noodles too.  My, but I was pleased to be sitting there dipping my charbroiled pork pieces into the various salty dipping sauces.  And I commented, not for the second time that this was a wonderful spread. Here’s to my younger one who’s interest in other cultures is helping us to expand our mapping of ethnicity and suburban New York.  There have got to be a few communities between us and the five-boroughs that host reasonable Chinese food as well.