Upon a Snapping Turtle

I took a different way home today after dropping my daughter off at school.  My calls which had started at 4:30AM on Tuesday were done for the morning, and I took a left on Haviland Road, which I’d never done before.  Anticlimactically it quickly leads one to Route 44/55, which I’d ridden out on just the other day.  But today I took a right on 44/55 and when back through the hamlet of Highland and continuing straight went along Vineyard avenue under the bridge that hosts all the 9W traffic.

I’ve long wondered what was down here, having ridden across that overpass some hundreds of times over the decades of my life.  My former neighbor had suggested to me that Highland had a bawdy reputation as being something of sin-city, back in the naughts of the twentieth century, when people would travel over from Poughkeepsie to drink and carouse.  Driving down River Road towards the landing on the Hudson I wondered about the historical purpose of this building the corner, or that brick construction with plenty of rooms.  Was that a house of the rising sun?

Unnerving to be there, down below the old rail bridge and the Mid-Hudson Bridge, staring up at what I’d only ever driven or trotted over.  The bridges are phenomenal from this view.  There are some lovely old houses and some aching fixer uppers there along the river as you follow Oakes Road to its dead end.  I had some mournful Robert Wyatt on that complemented the mist rising off the river. 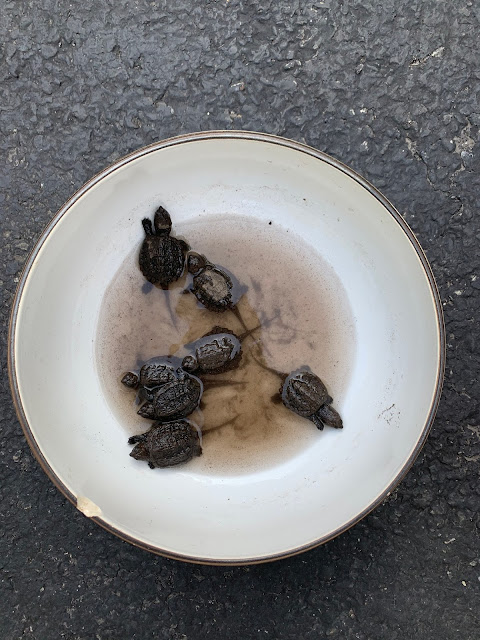 Heading out to do some work in the lower garage I noticed the white bowl that’s been sitting near the garbage bags now suddenly out on the driveway.  Peering inside there was a baby turtle and with a bit of angling of my phone I confirmed that this little guy was a baby snapping turtle, ‘common American snapping turtle,’ which my wife had found.  I went to discuss with her and spied a second.  She then found a third.  Soon we had seven little turtles in this bowl.  She must have stumbled upon a snapping turtle nest when she was spreading around the big mound of paving sand, my father and I had recently exposed when he tore down the dilapidated shelter that had been covering the pile. 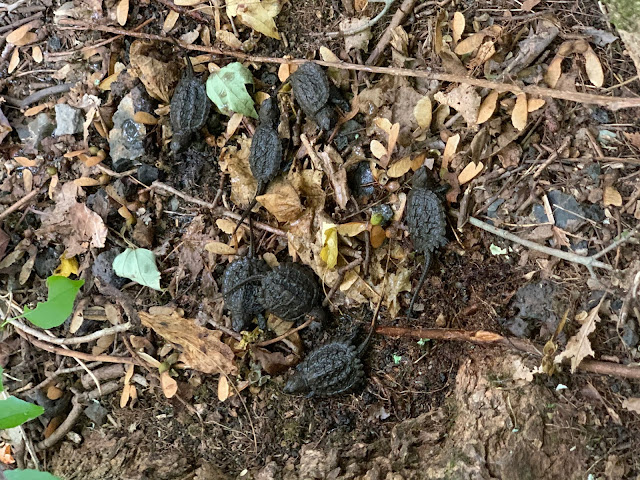 Everyone agreed they were very cute.  But, as with lion cubs or baby crocodiles, these little guys would not stay cute for long, before they matured into assertive reptiles with tremendous jaw power.  As is though, they seemed like appetizers for a dozen mammals and birds which generally carouse our yard.  My wife and I decided they needed water and we walked them down towards the stream that abuts our property, across the rail trail and, wished the septet we could only assume were siblings well.  And then we sent them all on their way.  Bonne chance mon petites tortues.