The transition is a fast one.  It was only a month ago that spring was still debatable.  Only ten days ago I was renting a coat for everyone so we could watch the chilly morning sunrise.  Leaving home for an appointment this morning I was grabbed a coat and considered throwing it on.  Glad I didn’t. It’s hot.  Spring feels gone, before it had even settled in.

Yesterday in Shanghai it was hot.  But that is a whole other climatic zone.   Last night when I got in it was raining, which was pleasant to see, pleasant to smell.  Sometimes that clears everything up in the air.  You wouldn’t know it now.  There’s a thick haze everywhere.  And for the first time this year, it’s time to shed layers. 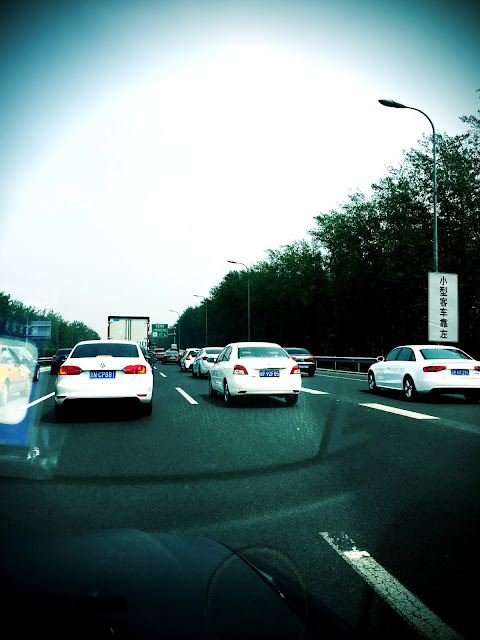 The ride in on the airport expressway today was lightening fast, remarkably quick. I didn’t even notice as I was reading aloud to the girls and before we knew it, we we’re turning off.  At present though, on the ride back out, it’s dreadful.  I’m fearful that his may all be connected to the auto show that is on at the New Convention Center.  We’re this to be true, it’s very bad news indeed, as that is our precise destination.

The usual routine for trips like this is head to our local burrito place on the way back home.  But today, when we get there, the turn to our taqueria will be blocked off.  The subsequent intersection will be barricaded up, as well.  It may be that a bike ride over is the best burrito strategy. 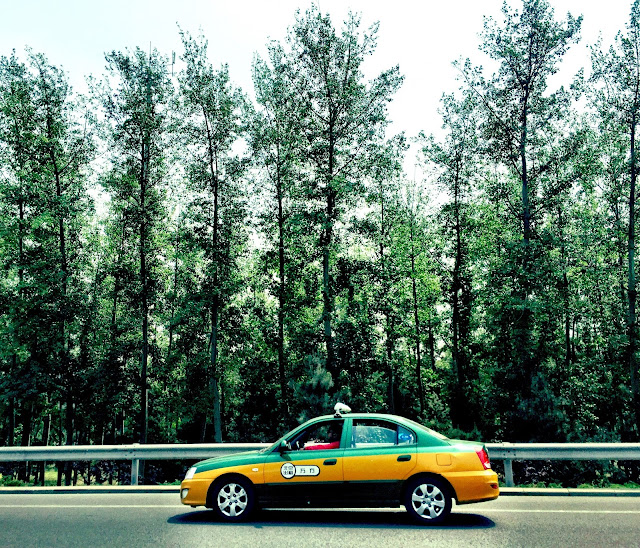 Will Beijing really have driverless vehicles in a few years as some predict?  Will the traffic then necessarily move swiftly as no human error will be possible to factor in?   What if a person with a three-wheeled cart suddenly veers out into traffic, presumably against the law?  I guess the whole line of convoyed traffic automatically accommodates, stopping if necessary but rapidly regaining speed.  Will traffic jams be like recounting horseback riding saddle sores in a few years time?  Some erstwhile perennial inconvenience that increasingly no one remembers much of, whatsoever?

Sitting here crawling along in the heat, I am willing to trade in freedom to drive for something more efficient.  Bring it.
Posted by John Fargis at 3:04 AM No comments:

Computer crashed this morning with about ten Word doc windows open.  They were all auto saved so when I reopen the computer ten ‘recovered’ docs appear in addition to the originals.  I think it is safe to assume that they are all redundant, but the first one I cross check is blank.  So I am hesitant to just dump them all.  I began the process but threw in the towel as its tedious and I prefer to write.

I have my bright orange Tona Cerveza shirt on as I ride out once again to Hong Qiao airport.  It’s gotten hot all of a sudden.  The last three days were cold and rainy.  Today’s sunny through the haze and maybe the first time this year I’ve felt it was uncomfortably hot.  One of my students met me in the street with my suede jacket on and asked, incredulous: “aren’t you hot?”  It occurred to me that I was.

Unlike some cabs that have the digital entertainment, blasting me with ads, a device that you start pounding to shut up, the moment you sit down, I have, instead a still picture in front of me now.  A white woman, in her early twenties, perhaps from Eastern Europe, with a low cut dress, generous cleavage and a pensive look in her eye is looking forward in triplicate.  I presume “La Zephire” is a place Chinese men to ogle at western woman.  What do I know?  It might be a library.  I’ll have to have a crack at translating the fine print. 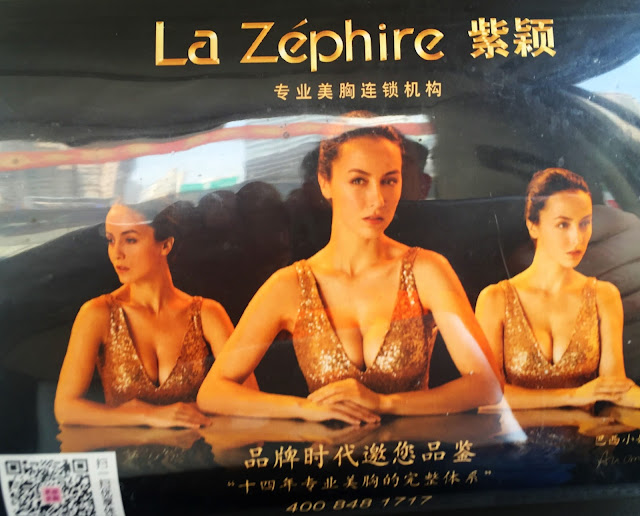 Running late as always.   Traffic’s slow as always.  Different airline this time though.  Air China had nothing but first class seats left for the flight back up to Beijing.  So I have opted for a flight with my friends from Xiamen Airlines.  Not sure that I’ve ever flown them before. They have a little middling dormitory on Tianbei Lu in Beijing.  When you ride out in the morning you always see the ladies for Xiamen airlines out on the road waiting for their shuttle bus. They wear turquoise scarves and there is a turquoise sash painted on their planes.  I like turquoise. 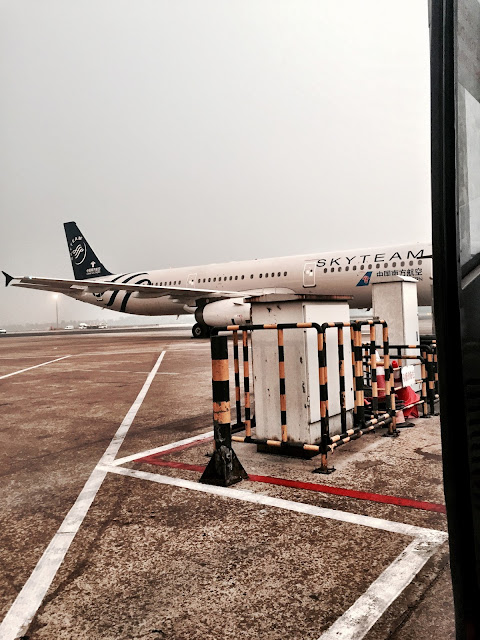 I don’t have any great pull with them but I may need it.  I am coming to the airport late.  It took my too long to get this cab.  Never give up though.  A fine adage.  In China you can always try.

And, well beyond the cut off time, I made it.
Posted by John Fargis at 3:23 PM No comments:

Three ladies who are probably my age are sitting off to my right.  They seem old.  But I suppose I seem old.  A young guy to whom I certainly seem old, has just walked in front of me.  He looks at me again and again and smiles.  There are bao jian private rooms off to the right.  A guy just popped out of one and ordered some more soup.  The lady is now standing immediately to my right, yelling something in Shanghaihua and ladling up a bowl of soup for these guys.  Now that I look, it isn’t soup.  It is some kind of alcohol in an old earthenware jug.

The scene was abruptly interrupted by two guys who, might appear to be cops from the badges on their arms.  They walked right up to my waitress and started yelling at her aggressively in a thick Shanghainese accent.  She was utterly unfazed and discoursed with them calmly.  From what I could discern with the accents this was something to do with parking.  Someone had parked in the wrong place.  Soon the table across from mine was notified.  A couple in their forties had their dinner interrupted.  The woman stood, and smiled and causally made her way out, presumably to move her car.  This, out of all proportion to the inflammable yelling that preceded it from the man with the official badge on his coat.  This was, simply the manner in which expressed himself in all situations:  forcefully. 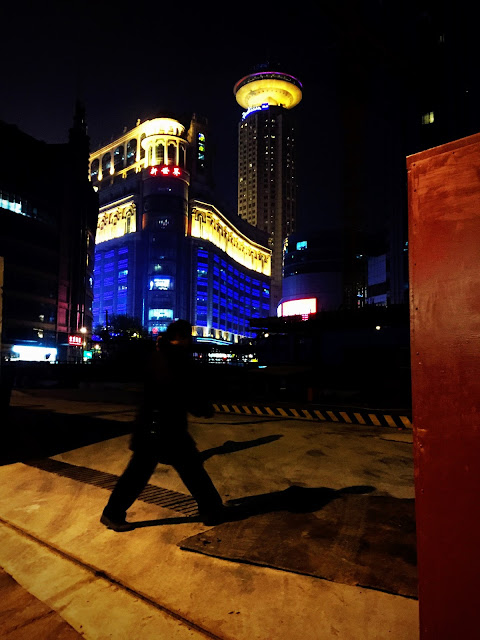 I asked the lady scooping up the booze what it was in the jugs.  She confirmed that there was a sweet wine and a dry wine.  Would you like a taste?  She asked.  Yes, I would.  I certainly wasn’t in the mood for Chinese liquor just now, but if it was the consistency of wine, I could take a swig. “You want the sweet or the dry?”  I’ll take the dry,.  It’s not unpleasant, and tastes like what I always remember Shanghai rice wine to taste like. Apparently a small vessel of this hooch is only twenty-five kuai.  Really?  Well in that case, scoop me up an amphora full.  She checks with her much younger colleague and is disabused of the pricing she’d assumed.  “Oh.  Sorry.  It’s eighty-five kuai per bottle.”  Right.  In that case, I’ll pass. 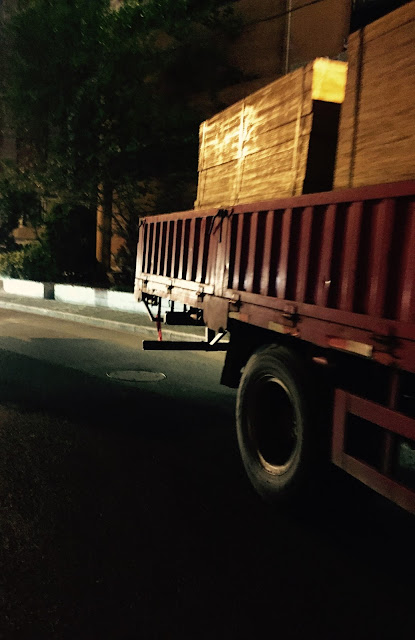 As usually happens this self-billed Shangahainese food place, doesn’t seem to have any of the classic dishes.  But it doesn’t matter.  I’ve just met the boss, Li Tong.  We’ve chatted.  He’s taken an interest.  Sensibly, he’s suggested I order half portions next time.  Presumably at half price.  Like everyone, he seems to be my age.  And, very swiftly now, I am the only patron left in the place.
Posted by John Fargis at 3:07 PM No comments:

Off to the right is a bus full of Shanghai commuters, packed in, heading home.  I’ve long taken for granted that I can hop in a cab and any hour and have someone drive me around.  Cabs are one thing that has remained cheap in China, over the years.  Spare a thought side for the cab drivers.  These cities have left them behind. 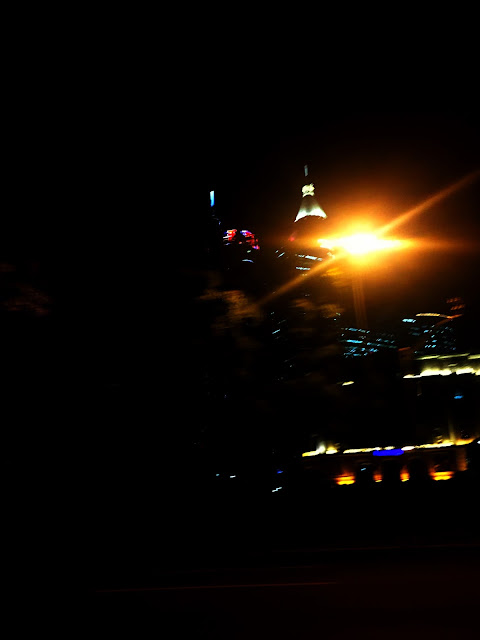 A Gotham like quality is waxing in Shanghai tonight.  Riding along under the overpass on Yanan East Road.  Off in the distance, across the Huangpu, impossibly tall buildings cast their shadows. Going to meet a friend for dinner.  It’s dusk and the day is almost gone.  It wasn’t much of a day.  I don’t believe I will miss it.   A stoic might ask: “and what if it were your last?”

We’ve got crap-ass Shanghai talk radio on the air.  The cab driver probably knows these personalities rather well.  “Oh it’s 6:30PM.  Time for Hu and Du.” I ask and he also has opinions of this music that the team have cutting in and out of the broadcast. 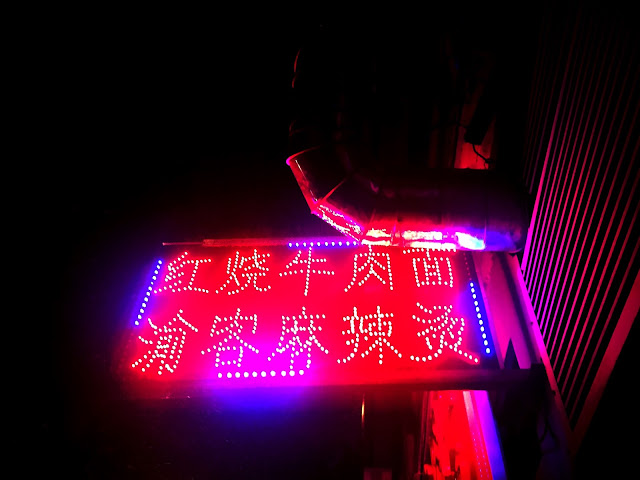 “Crosstown Traffic” I’ve texted my friend.  That’ll be the cause of it.

And now, later, after taking a call, in the hall, listening to someone in Connecticut talk while I stared at the Yaozu paintings on the wall, I’m ordering a bowl of friend noodles from a vendor in the street. Elaborate process.  Tasty.   To be eaten at home, rather than the back of this last cab for the night.
Posted by John Fargis at 7:48 AM No comments:

If you sleep with the overhead lights on, the glare will push you to cognizance.  Early you’ll stir and you rise feeling like you have already missed something.  And then you realize all the dull obligation that awaits.  It’s right there where you left it.  The uncompromising lights were left on purpose so you’d reach this resigned alertness, sooner.  Awake and stuck there. 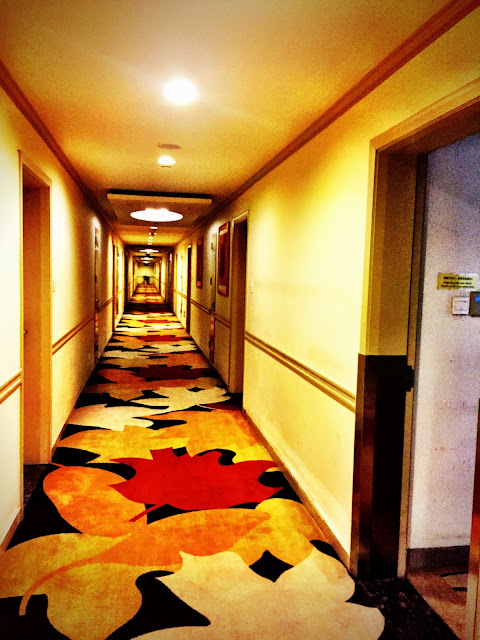 Really?  Off again.  Then the sound of a not insignificant sized fish, hitting the floor with a wet smack.  The wind has broken the wet seal that held the window in place with a sucking smack.  The room is suddenly open to the night.  Traffic comes in now.  The cold has hit me.  I hadn’t locked the window shut it seems.  I do that now, turning the knob.  Once again, I’m up.  But not quite ready to sit at the desk.

This tidal pull continues and when I am finally sitting at the desk, I notice that this typing has advanced to page 192 of the document.  The space bar was down for that much time.  So.  Work then. 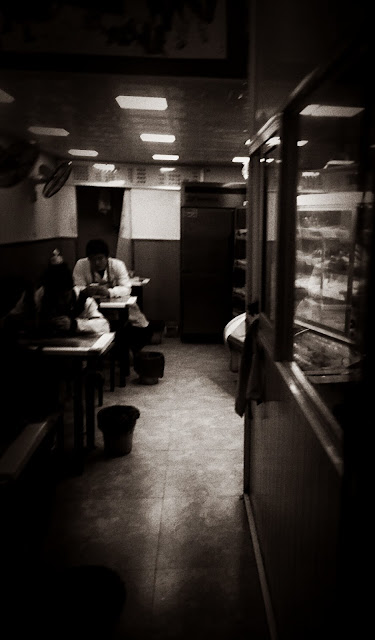 I need to talk about Robert Oppenheimer today.  I found a clip on line where he is reflecting on watching the first bomb go off in Los Alamos.  He references his translation of the Bagahvad Gita : “I have become the destroyer of worlds.”  Something too about his ponderous cerebral quality knitted to this odd antiquated, everyman American English.  When I was up and then asleep I kept thinking of him and the way he said words like “paper.”

Posted by John Fargis at 4:22 AM No comments: