The phone call that came at 5:45AM usually means there is a car that has arrived.  They're calling to confirm that its a car we've ordered.  But this car isn’t for me.  All I need to do is see my step son and his girlfriend off.  They’ve missed the call, in fact. They were in the shower.  We get the guy admitted in.  I find some shoes I can slip on and get their not insignificant amount of luggage loaded into the little Beijing cab and send them off and on their way to Beijing South Station for their train to Shanghai.  Wave them off and close the door, ever so glad it isn’t me speeding off at this hour.

I keep expecting to find something when I look to the papers.  I want to find, I suspect, that if we haven’t come upon definitive moment of reckoning for our president, or that at least we have a new outrage or two to chew upon.  This is certainly a rather unhealthy relationship with the printed media and the powers that be.  I need to consciously push myself to source other news that doesn’t concern him.  That used to be all I’d ever read.  Reading about outrage isn't accomplishing much. 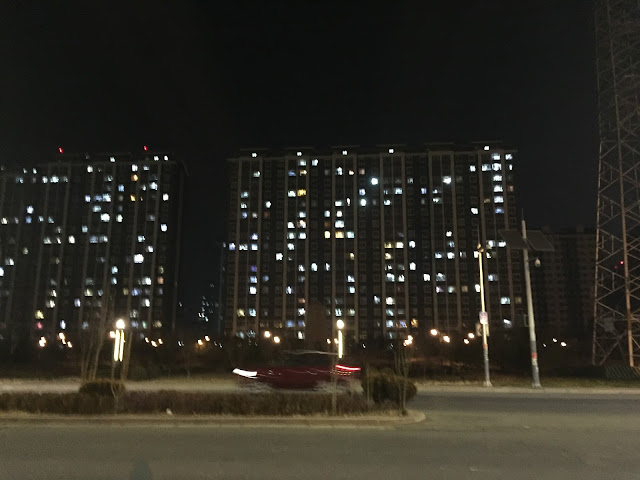 I conducted another interview this morning on behalf of my alma mater and it went well.  Unsolicited but I always feel obliged to tell these young people considering my university that it really was the most magnificent time I can recall, certainly the first year at least, before you had your heart broken and slogged along through those interminable blues.  The first year though was an innocent, indelible, time-lapsed evolution of marvel that I recall so well, even today and certainly if the topic of the place is one I'm supposed to channel something substantive about that's where my mind trains itself.

It almost didn’t happen but I made it to the gym late this afternoon, far later in the day than I usually do.  I looked around and found my wife had already gone off to her office.  I called her at 4:30PM but she had no plan to return.  A cab to the gym?  Nah.  I resigned myself for a moment to simply not going.  Quitting is so much easier at the end of the day.  But then my daughter asked for a ride to a nearby mall to see a friend.  Now we were beginning to build a movement and sure enough the invocation of my daughter’s needs allowed me to tack mine on the end and soon I was walking across the high school parking lot in my shorts and hoodie. 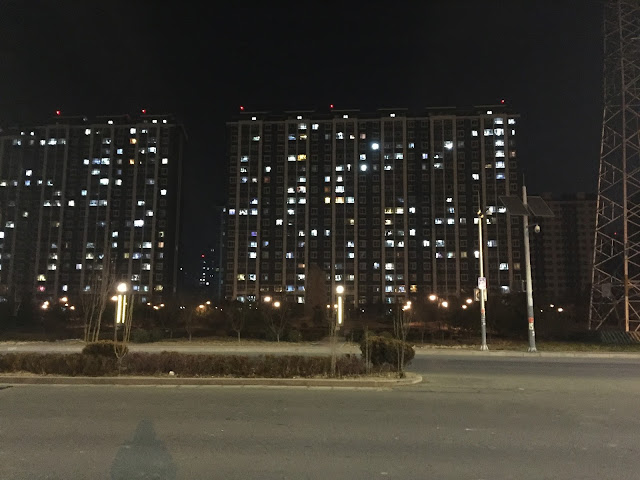 On the way back out into the dark of night, I needed to walk in this silly attire toward the main road.  “Come pick me up.”  At first I was told to walk home.  But I painted the picture of my cold bare legs and before too much longer I had managed to talk her into coming out to meet me there at the gate, while they locked up the school up behind me.

Posted by John Fargis at 7:06 AM No comments:

Perhaps it had something to do with Christmas.  It was the end of a long Christmas holiday and I’d given my older one a Yamaha acoustic guitar of her own this year.  We have others around the place but she’s expressed in interested in having one and though we’ve tried before I figured she’d probably make more progress if she had one of her own.

We spent some time going back  over a bunch of the open chords, that feel so thick and resonant on an acoustic guitar.  Bar chords are fine for an electric guitar but will be too demanding for uncalloused hands, just beginning to learn on an acoustic.  I thought to show her a few woman guitarists who could command a room with nothing but an acoustic guitar:  Here’s Bobbie Gentry singing "Billie Joe Macalister," there’s Joni singing Big Yellow Taxi, Joan Baez singing, “I Dreamed I Saw Joe Hill.”  Then I had it in my mind to find something Irish.  We've been to Ireland after all.  One search lead to another and I was soon on to the Dubliners and Luke Kelly. 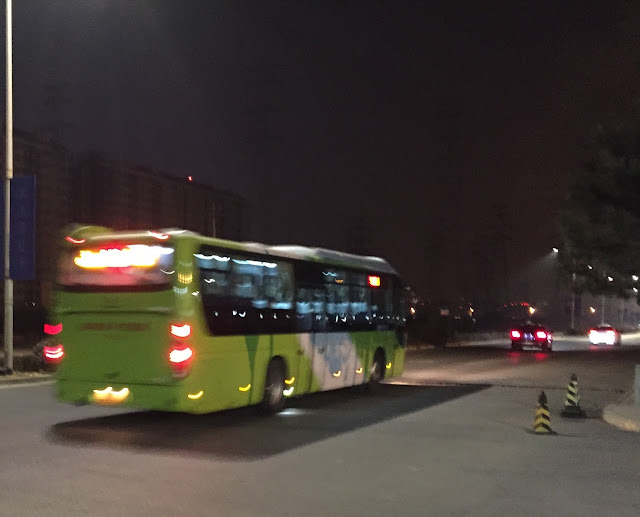 I didn’t make her sit through “Whiskey In the Jar” but I think I left the window open there on old Luke Kelly singing “I Dreamed I Saw Joe Hill.”  She went off to practice and we vowed to play again soon.  But later that night, when I was back in front of my computer and should have been doing some work, I suppose, I reacquainted myself with Luke Kelly and his big smile and curly red mane of hair.  “Luke – A Documentary on Luke Kelly.”   https://www.youtube.com/watch?v=fzfswNa7ZTk 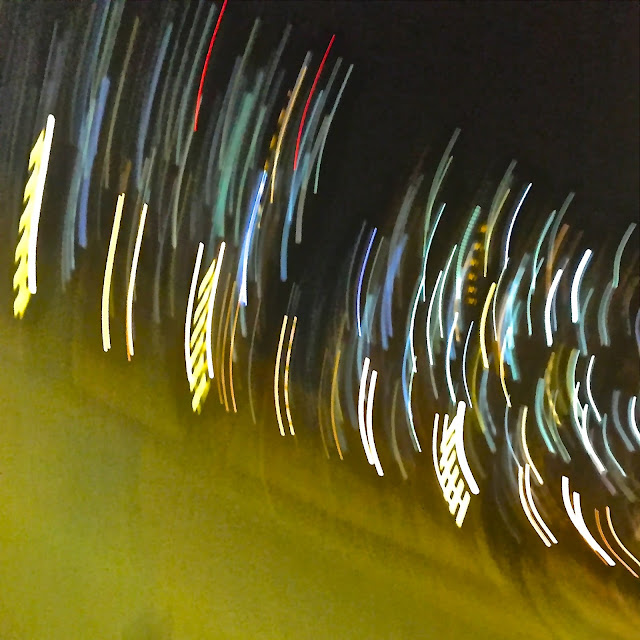 I’d remembered hearing “Alabama 58’” for the first time when I was in Ireland a few years back and being immediately struck by the voice, the cutting message, the reference to Diggers and Finians.  Heading over to Liverpool the same years the Beatles were coming up.  Learning from Ewan MacColl and Peggy Seeger and returning to Ireland as a folk singer, as a socialist. With a bit of time I realized then that most of the songs I’d long enjoyed by the Dubliners were his voice.  It was his baritone that had been behind “The Town I’d Loved So Well” and “Scorn Not His Simplicity” and yes, “Whiskey in the Jar” as well.  What a handsome man and a handsome voice he was to consider, filling up the room with his utterly plausible tone and then dying way too soon from brain tumors at the age of 43.

Posted by John Fargis at 6:54 AM No comments:

Merry Christmas.  Up earlier than everyone else.  Last night my office was the center of the wrapping frenzy and there are spent tape tubes and slivers of wrapping paper all over the floor and spilling out of the waste basket.   It sit down with my computer and look over the papers.  There doesn’t seem to be any good news here at the end of the year, on Christmas morning.  Someone has left Steven Mnuchin a box of horse manure at his home in Hollywood.  That cheers me up.

My little one is down earliest around 7:30AM or so.  We are officially beyond the Santa artifice this year and accordingly I do not act amazed that there are more presents out under the tree now, then there were late last night when we went to bed.  Everyone asked me to put a breakfast meal together and I figure I’ll need to head over to the market to get some bacon, a few potatoes.'' 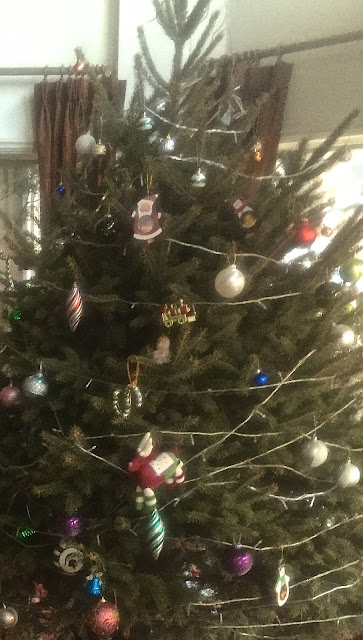 The little one wants a special caramel latte from Starbucks.  Her sister isn’t awake yet but the little one confirms that she wants a soy latte.  I end up with a drink for everyone and a bag full of scones.  The lady whom I often see there seems particular eager to wish me a "Merry Christmas", which is thoughtful and genuine.  The bag full of coffees unfortunately does not survive the turn into our compound and someone’s cappuccino begins to leak through its taped lid into the paper bag and on the carpet floor. 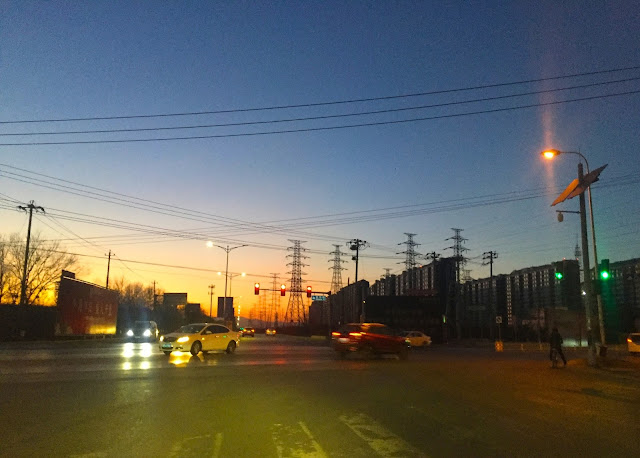 By the time I return my little one has managed to wake everyone up.  Breakfast later, I’m informed.  My little one takes charge and ensures that everyone has a present and suggests the order of the circle clockwise and, once she has confirmed that everyone is paying attention, she instructs me to begin.  “Open your present baba.  Open it.”  A purple tie.  I put in on and quickly the focus attention is on to the next person in the circle.

Posted by John Fargis at 6:32 AM No comments:

Sprayed With a Fake Snow

My wife is set on making the Christmas eve dinner this year and I yield and allow her room to set the menu.  She takes it all very seriously.  My younger one and I decide we’ll appoint ourselves some pie duty instead.

Emails keep arriving from Amazon.cn.  I assume that they all say that the presents have shipped, they'll b there soon . . . but when I through the note into Google Translate to confirm it becomes clear that many of these notes have the phrase “very sorry” inside, which is not encouraging. On some of the orders they want me to reenter my credit card info.  On others, it all simply went right through.  This is very annoying.  I reenter everything again and get new emails saying that everything was well received.  But I’m suspicious.  I’ve seen these notes before.

We’ll need to some physical shopping.  As the afternoon draws on the kids and I struck a bargain with their mom, to drop us all off at the local mall: Shine City.  She still needs to buy groceries and I am realizing that this is going to be a particularly late, Christmas Eve dinner.  The kids want to get something in Starbucks.  I’ve been slurping coffee all day and uncharacteristically pass up the caffination.  But after I pay I begin to eye the caesar chicken wrap behind the glass.  We all agree to have some kind of meal after we shop for a bit. 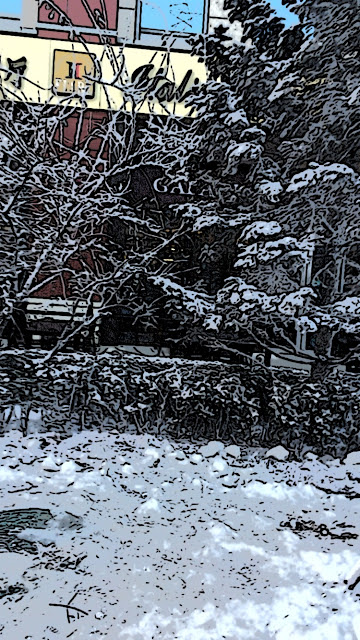 Walking around listening to A Band of Gypsies I notice that the mall has been sprayed with a fake snow that people are all appreciative of.  Kids run their fingers through the fake snow, writing things in the white dusting.  I look for a while and can’t find anything.  The hip kitchen supply spot we’d visited one night about nine month’s back is gone now.  My younger daughter had warned me.  Finally in one place I see some baking pans that have a nice aqua marine color and after deliberating the stated price for a few moments, I ask the clerk to wrap them up for me. 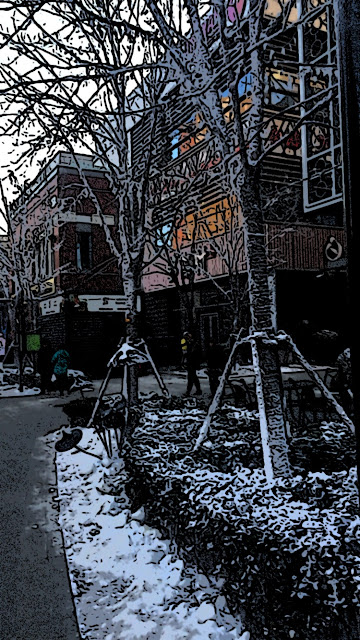 Later we duck in to Element Fresh.  I can already taste their Greek Salad with big cubes of grilled lamb.  Sitting down we look at a holiday menu and ask for the regular selection.  It doesn’t exist today.  We only have the holiday menu.  This strikes me as particularly annoying and I groan aloud, unwittingly.  Back on the street again, its cold and nothing else among the dozens of restaurants seems to fit the bill.  Soon were in a DiDi heading back home.