To Do So on Tian Bei Lu


Back in Beijing.  The cabbie says its cooler than he than it had been.  We called one Didi but you need connectivity to summon a Didi.  My China SIM card is out of funds.  Needs to be recharged.  My daughter, is of course, somehow already on line.  "How did you do that?" "I’m on the US SIM card. "  "It works here?"  "Yes.  It does."  I couldn’t use this T Mobile SIM card to get a connection on Route Nine in Poughkeepsie.  But I was able to do so on Tian Bei Lu in Beijing.

Back home I unpack.  I want to see all the refrigerator magnates I bought.  There’s the one of the submarine we saw in Vladivostok.  Where is that naïve Georgian painting of the girl in the purple dress.  I keep scrounging and eventually find the one for Krasnarsk, which we didn’t visit, but I grabbed a magnate, there in the town train station, when I was also getting juice and bad sausage and cheese. 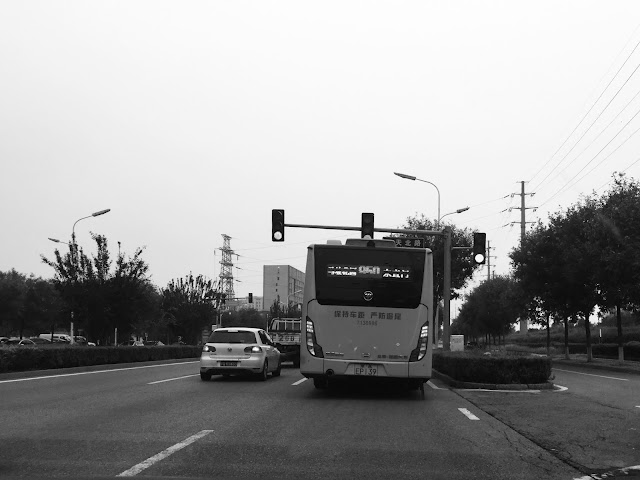 I got all my photos uploaded.  This took a while.  My computer, the old workhorse, has issues.  It got stuck on some upload.  Then it told me there wasn’t enough room.  We sorted it.  They’re all up there now.  And I’ve flagged the ones I want to see and rotated them all so they’re facing in the right direction.  And now I can sit back and wait for them to rotate in to view.  I’ve been looking now for the last fifteen minutes.  Certainly one or two snaps of St. Petersburg have materialized and more photos will follow. 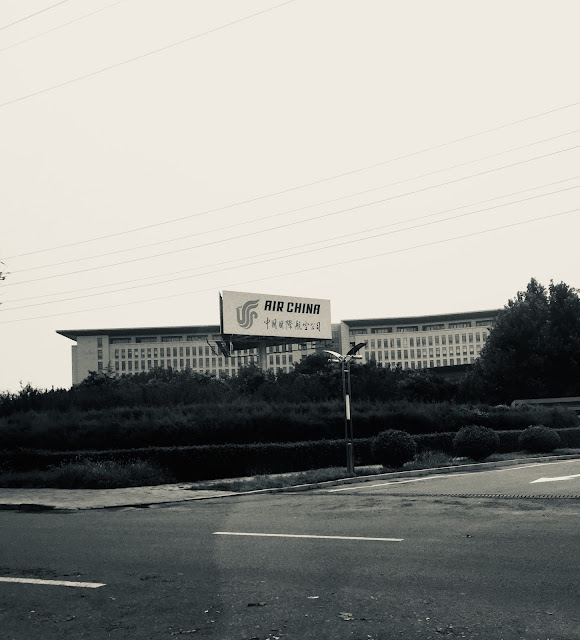 The internet turned off at midnight.  I quickly discerned that it was just the phone company’s way of saying: “come pay your bill.”  I’ll be over toe Unicom kiosk then, for sure, first thing in the morning.  But there goes my evening of catching up on work and getting all back in place.  I can’t hop on my phone’s WiFi.  The US SIM won’t work as a personal hotspot and those people don’t want me to have any service till I’ve paid them either.  We’ll do it all tomorrow then.

I left some things behind in SF.  That’s for the best.  I’ll pick up that thread later, let’s get back into stretching for now and put myself to sleep with a paperback.

Posted by John Fargis at 3:42 AM No comments:


A journey that started out six weeks ago with a flight to Vladivostok is now drawing to a conclusion, with a return home, to Beijing.  That was the travel agenda of a high school teacher, as yet unmarried off to the third world somewhere with a thousand-bucks in his pocket and two or three New York City School system pay checks to return to when he got home.   I’ve managed to turn this into a familial ritual.  I get to do so for just a little while, longer.

I have months now, perhaps two months’ worth of entries I must load up.  I have managed to maintain this commitment, to render day after day but many, many hours of actual posting are await like a miles-long runway before me.  I was reading the Egyptian writer, Sonallah Ibrahim.  The introduction to “That Smell” suggested that he had been particularly influenced by Hemingway.  He worked to capture unrelenting truth, as he saw it and to do so sparingly without flash.  Hemingway wanted people to write every day.  “I’d like to write Mr. Hemingway?”  “Well.  What have you written today?”  That’s the baseline commitment, without which little else will ever come to pass. 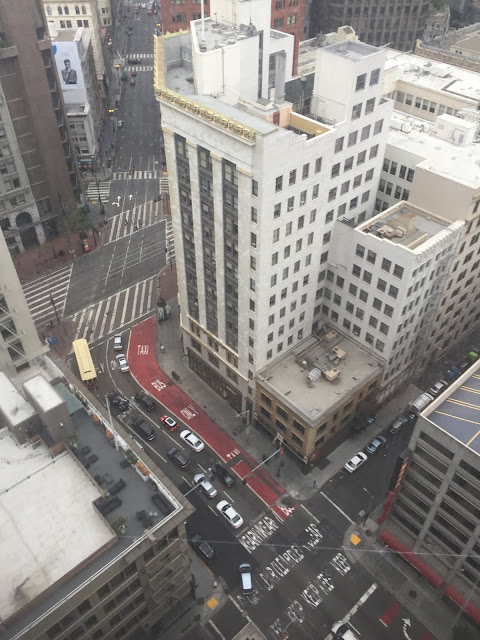 I met an old friend in the airport.  She was traveling with her daughter, just like me.  Her daughter is going to school in California and studying psychology, just like my daughter wants to.  She quickly confirmed that she’d recently had a stroke.  Oh dear.  She said that she’d been under too much pressure.  She described a week, like I often have, running hard and traveling every day for week after week.  I am returning to Beijing considering the importance of maintaining good health.  My, oh, my.   I want to do more meditation, more stretching and take a break from indulgences.  This is what I said unto me.  Help me Lord, and give me strength, but like my man from Hippo, just not today. 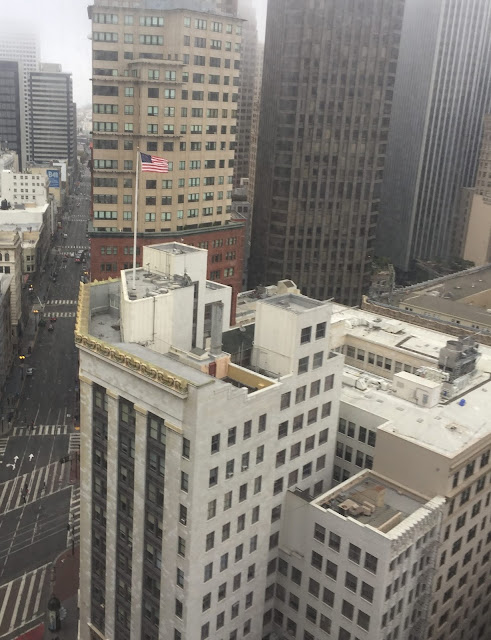 Soon, it’s back to "John Birch.  A Life."  The biography my friend, my mentor, wrote is something I should probably be able to finish during this flight.  My daughter and I are in economy class, but wonderfully the middle seat is free and we’ll be comfortable.  Breathe deeply.  Try to balance out towards a sustainable arc.  Let’s focus now on making this final year as a quartet, the best it can be.

Driving out to SFO this morning we had a good chat with the Uber driver.  He was fed up with Trump.  Who isn’t?   “The thing is I can’t find anyone who admits to having voted for the man.”  Yes, I suspect there aren't many there in SF.  I'll ask my cabbie in Beijing.

Posted by John Fargis at 3:33 AM No comments:


I went over to get some shoes.  I’ll get shoes.  I saw the shoes yesterday.  Today I would buy those shoes.  They were brown with a white sole.  They were in the same Ecco shop I bought my last pair of shoes in.  Habits are important six months back.

I asked for the shoes.  He had them in size nine or twelve.  I am size ten-and-a-half.  "We do have the same shoes in green in a size ten-and-a-half."  "I see."   I considered the green shoes.  They looked cool.  I considered myself in green shoes.  It has been a while.  Green.  I was growing more and more comfortable with the idea of green shoes but I knew I wanted something that made my Achilles heel feel well-supported.  And these just did not.  No.  I didn’t get the green shoes.  The brown ones no longer mattered. 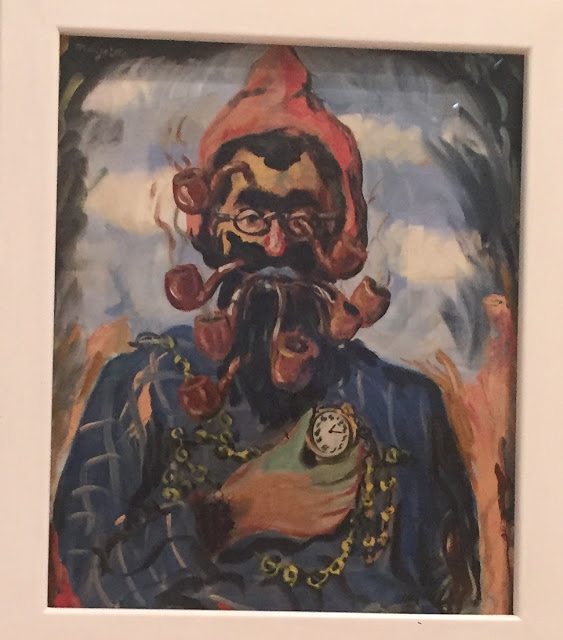 The SF MoMA is across the street from where we’re staying.  “Hey.  Can I talk you into it?  It’s super close.”  It was this irrefusable pitch I served up to my seventeen year old.  We bargained and then before we went off to get her clothing at Brandy Melvin, we popped into the SF MoMA.  They were having an exhibit on Magritte.  My daughter had never really considered Magritte.  I suppose I first started considering his provocations when I was seventeen or so.  I paid ten-bucks extra so we could see Magritte.

“Where do you think he’s from?”  “Uh.  France?”  Yeah, well, with a name like that, Yes.”  Once we are allowed to enter we head straight to the wall with all the writing and quickly discerned that  I'd been wrong and that Magritte was Belgian.  With one eye I considered weightless rocks and street lights illuminating the evening on a bright sunny day and with the other iris I was watching her watch these things.  “Yeah.  It’s cool.  I like it.” High praise! 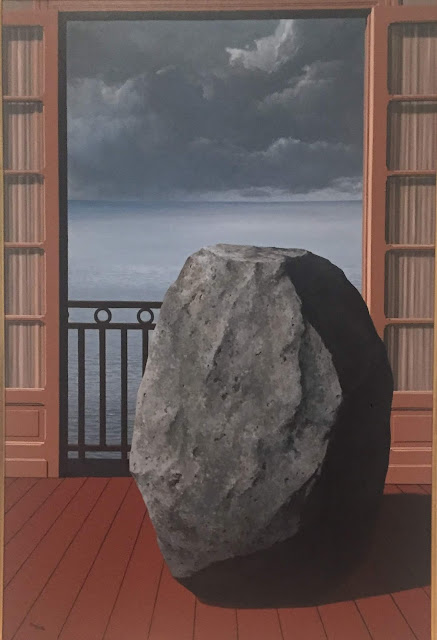 Downstairs, is the permanent collection from the year nineteen hundred onward.  “Let’s check that out and leave?”  “OK.”   Soon we’re in front of Diego Rivera’s peasant farmer with the many flowers up upon his back.  Remember the Frida Khalo refrigerator magnate on fridge at homeThe lady with the flower's in her hair?  That's her man, Diego.  The museums of Beijing so rarely delight.

Posted by John Fargis at 1:28 AM No comments:

The Moisture to Continue


The Bank of America on NW 21st. Avenue, there in the "Nob Hill" section of Portland is open for business.  At 9:35AM I walked in to a phalanx of men and women in small town power suits, and business gear.  A grand opening.  "Have a Danish sir.  How can I help you?" My wife, on the other side of the country was signing something at a Bank of America in New York.  As long as I found a Bank of America in my locale, we could get this done where we'd both be able to sign and officiate the account.  I was assigned to Christian.  This was his first week.  He was nervous and pleasant.  He wanted me to talk to the small business banker.  That gent was very knowledgeable. "He knows everything about small business banking."   I'm sure he does.  But all I wanted to do was sign a document, Christian. 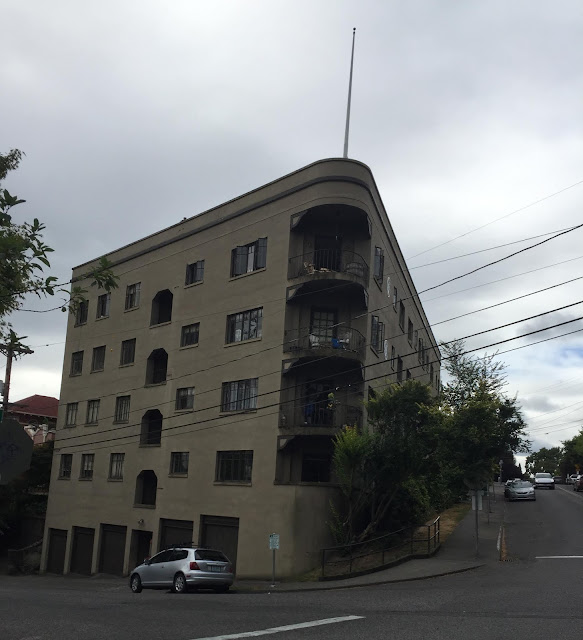 It took much longer than it was supposed to.  It was not Christian’s fault.  As he appropriately reminded me.  This was the bank back in Poughkeepsie that was taking thirty minutes, not fifteen minutes.  I still had to get an Uber back to my Airbnb, get the luggage and talk the driver into tearing out to the airport in twenty-minutes flat.

Christian had the fax, finally.  I signed three pages worth.  Now I was done.  The Uber driver came fast.  "Hello.  And so . . . where’s home?"  "Mogadishu."  I had been assuming this gent was from Eritrea but I couldn’t see how tall he was till he got out to help me with my luggage.  A creative driver, he got us there through back roads with five minutes to spare.  "Thank you."   So . . . let’s get a coffee. 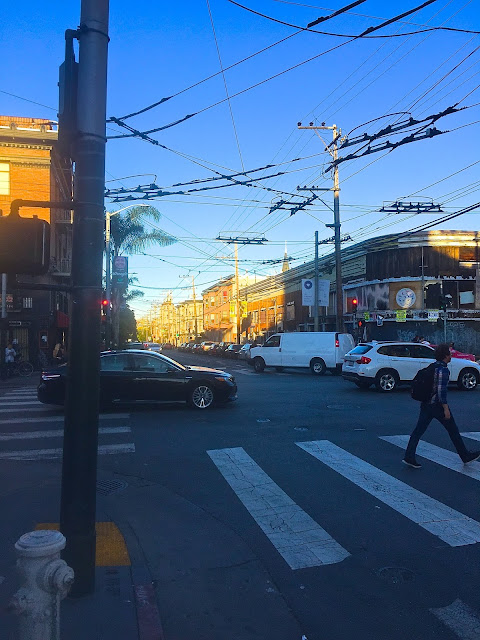 Sun now.  There’s always cutting sun at SFO.  Always sun till at least you get to the land-fill at the end of the Baylands Soil Processing Plant on Highway 101 with all the sea gulls that circle it and the fog halts there where it no longer has the moisture to continue.  My daughter asks if it will be warm or cold.  I tell her it's warm in the sun.