The Veracity of All

Joe Bataan’s Eddie Torres singing about Puerto Rico, now that makes me miss New York.  Standing there on the corner waiting for a Didi.  It suggested he’d arrive in nine minutes.  Is that too long?  I look at the word “cancel” and consider pressing it.  I could do it and then do it five times again, until I found someone who was only five minutes away.  Fortunately, I suppose, I already felt connected to this human being, responsible for his feelings, and decided to relax and look around my surroundings for a moment.

There was a construction site behind me, of course.  I took a picture of it.  I turned and took a picture of the enormous Zun tower that will soon be part of tomorrow’s old-Beijing that’s been there for as long as anyone can remember.  The sun’s wrong and none of the pictures seem to reflect what I’m seeing.  Perhaps it’s just the viewing of phoneglass in the strong afternoon glare. 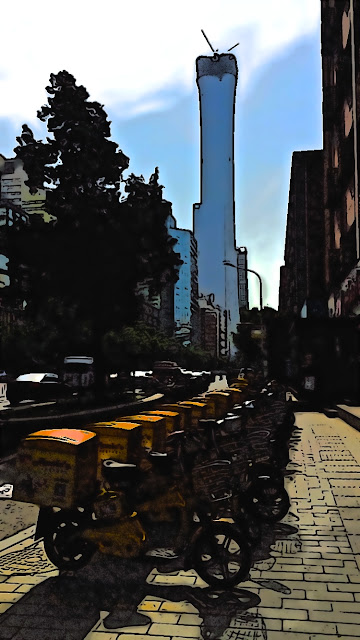 Leaning back against the corroding metal that makes up this gate, the Joe Bataan comes on.  And it almost hurts how much it sounds like Manhattan.  Something about standing on a corner in New York acknowledges the veracity of all that is playing were New Yorican salsa to be what just came on. There are people before you, there in the New York of your mind, certainly, who take, or once took, this music very, very seriously.  Urgent music rebounding off the City’s demanding cadence. 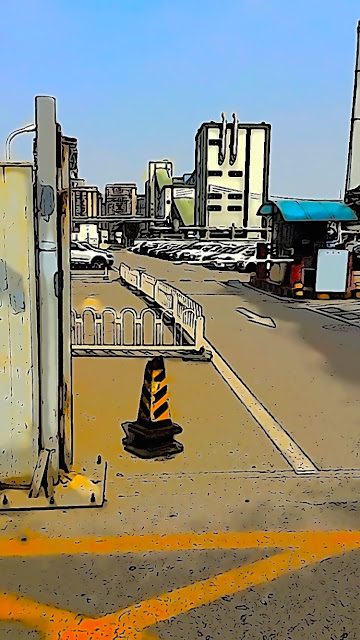 The reflection is different in Beijing.  And it hurts, like a tooth when you notice its missing. The brain automatically buttresses all the choices that led to the today you are presently living in:  one of the first things that I consider is safety. There was a Serengeti-like thrill in New York at any time I ever lived there.  You generally needed to be careful, mindful, respectful.  You needed to be prepared.  And sometimes you had no business even being there at all.  Beijing is generally safe.  That’s a fine thing.  It’s a better recipe for longevity.  I prefer it on the balance.  But it doesn’t echo back anything particularly interesting just now, scanning out from the ‘wistful daydream of a faraway land that is precisely what “Para Puerto Rico Voy”, was written for.

An Armada of Trucks


The circus is leaving town.  All around our neighborhood, the same trucks that came and unloaded a convention’s worth of stuff have returned to pick it all up.  No harm fellas. You’re all just working away, trying to earn a living.  But your trucks really are a pain in the ass.

To say there is a fleet of trucks would be to grossly under report.  How many boats are in an armada?  That’s more like it.  What do you do with an armada of trucks that are waiting to pick things up?  Yes.  Well-spotted.  You need to park them.  No.  No parking was anticipated at this tremendous facility.

Practical.  They Chinese are always practical and the streets provide as good a parking lot as any.  There isn’t much the cops can do, or choose to do, other than drive buy in their unassuming cop-cars with their lights flashing.  Trucks now, are lined not just one but two lanes deep for three kilometers along Tian Bei Lu.  They occupy the first block down along An Hua Jie and then the easterly mile or so up to the school.   Countless flatbeds, parked on the streets we normally use, waiting. 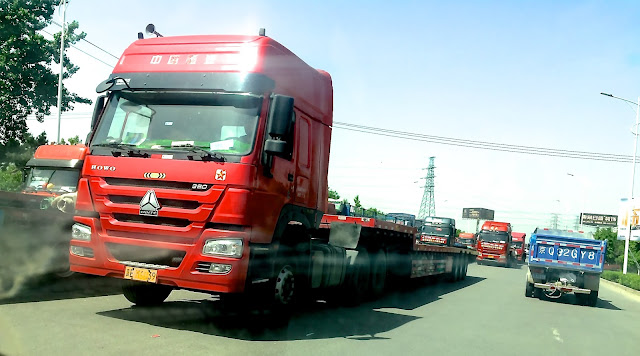 Traffic in our area is usually straight forward.  Now we pull out around and pull up along and drive extra blocks to avoid trucks.  I am heading to the gas station.  The tank is really, empty.  The traffic has been at a stand still for a while now.  We inch up.  I turn the car of to save gas.  We inch another ten feet and stop.  Turn it off again.  Finally, I realize an innovative trucker up ahead has decided to park in the third lane of traffic on our road.  Good thinking.  That means that in addition to the two lanes of traffic the trucks already command, on this four-lane road, this guy has now claimed the third lane. 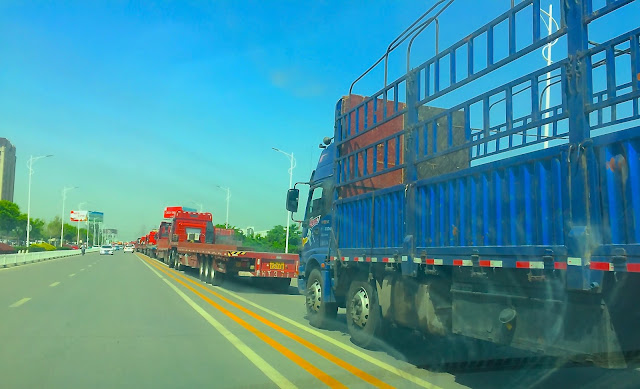 No one is frustrated with this man.  No one is yelling at him or anyone else.   No one is particularly happy, but every waits their turn and cuts around this innovator and heads off on their way.  Once I get gas I am going to return via a different route.   Truckers be gone.


Down to the Apple Store.  I had a pang of anxiety heading over.  Originally, I'd been content with a two-of-a-kind-hand, sort of calm.  I was going to have them look at my laptop.  If there was anything wrong, (and I was relatively certain my battery had drained now to irrelevance) I was still under warranty.  I’d be fine.  What could they say?  This is what I bought Apple Care for, every time.

Left a friend’s house and settling into the back seat of a Didi, my mind found itself presented with a poker straight.  You haven’t made a Genius Bar appointment.  It doesn’t matter if you’re under warranty.  They aren’t going to have any openings for you. 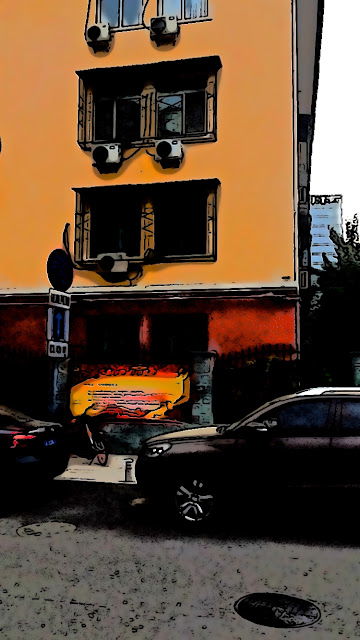 I decide to play the hand I have regardless and trot up Steve’s clear glass steps and find me a young person in a green shirt.  (I think they used to be red. Now they’re all green.) With one and then another young person I insist on speaking Chinese.  I could speak English here but I don’t want to somehow.  I may be a bit elliptical explaining the software crash, but I’ve navigated harder things.

I notice how assertive I am as I try to explain the problem to one perfectly reasonable young gentleman and try, in real time to shift gears and relax my grip.  I smile.  I start to adjust my cadence to something slower.  Something more like his pacing.  No perceptible change in him but I’m cognizant of all the times I’ve heard a Chinese or any foreigner speak English in an agitated fashion.  It always sounds funny.  I don’t want to sound funny. 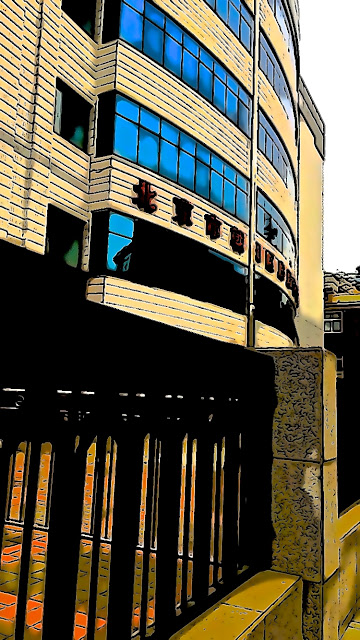 They tell me they’ll text me in an hour, when the specialist is ready.  Seems reasonable.  Downstairs I look over the iPhone X’s. They look cool.  And I “need” one in as much as my iPhone 6 is hopelessly gummed up now with planned obsolescence shortcomings.  Wisely, I think, I manage to leave the phones there, without buying one.  Soon.  But not today.


Paradise?  Looks rather lovely in the pictures on the internet.  I’ve never been.  A friend who’s coming to town has developed an affinity or Feng Huang in Hunan.  I’ve found a train we can ride out there.  We’ll be on our way Friday morning.   Just throw it in Google Images and see what you think.

There are other old trading towns in Hunan, with remarkable architecture as well, nearby.  We start comparing them all and begin to shore up how we’ll spend the few days out there.  Together buy our train tickets and start trading ideas on hotels.  Ahh, but wait.  He’s found a few people suggesting that Feng Huang used to be cool.  However the arc of cool, they plainly assert has moved on and what was remarkable has become commercialized.  An opportunistic make-over has turned rustic into Mulan.

I tell my chum not to worry.  China’s like that.  This person may be spot-on and then again, it may not matter.  I realize that, under nearly any circumstances, certainly the sort of circumstances the article’s author was complaining about, I’d still be interested to see what’s there.  It is almost always interesting if not pleasant to see how China changes. 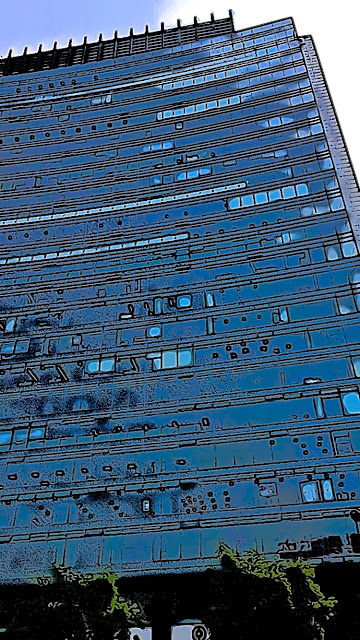 It will be my second time to Hunan in a month.  Before that I think I’d only ever been to Changsha once or maybe twice.  Once again, we’ll be in the Xiang countryside.  My wife, a northern gal, grumbled a bit about the people we met, but I thought they were all quite lovely.  And the town of Nanyue we’d visited was a bit made-over but beside the road paved up to the top of the sacred mountain, (and that was a big one) they hadn’t ruined anything, more than any other Chinese tourist site had.  This Friday then.  We’ll see.  I’ll let you know what Feng Huang is all about as a two-and-a-half decade, veteran of striking out into the countryside.  I suspect I’ll find something to like or at least comment on.