It is good to be home.  That was a long one.  My younger daughter was home when I got here and was kind to hang out with me as I pulled two weeks of dirty laundry out from my bag and schlepped it over to the washing room area.  For some reason I’d thought to buy everyone soccer shirts from the match I’d seen in Curitiba and I now present this to her, with something less than full confidence that was a good idea.

You play a song, then I play a song.   She and I bond this way.  She is over the moon because BTS, her band, have a new tune out.  Soon she has a new tune by the group leader up on the screen.  RM, seemingly the only member of the group with solid English, is my fave, for sure.  He raps well and, speaking at the U.N. for example was rather articulate.  This new tune (looking now, I can’t seem to find it on line.  Will have to ask:  And it is “Map of the Soul: Persona 'Persona' Comeback Trailer”) is actually quite funky.  And I know she likes it when I like them. 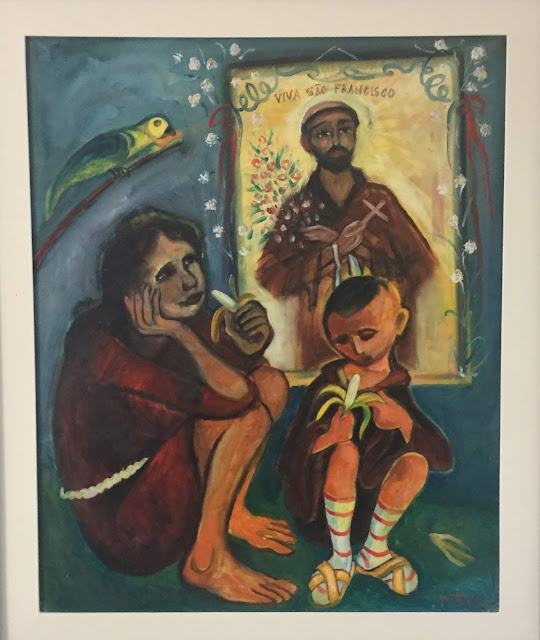 Yesterday I was finally able to drop my phone off with Kevin.  Our phone-fixer man out at the club house.  The poor old iPhone six has been in its worst fix ever.  The motherboard appears to be shot (Kevin’s diagnosis) and I must press repeatedly, forcefully at odd intervals for the touch screen to activate a particular app.  Then, once in, say Wechat, it continues to feel pressure and types out randomly, sometimes sending randomly.  I’ve had friends and business contacts ask me if I was alright, after receiving messages from me like:  “Ha J L L,,,IHAH@234”  and other such nonsense. 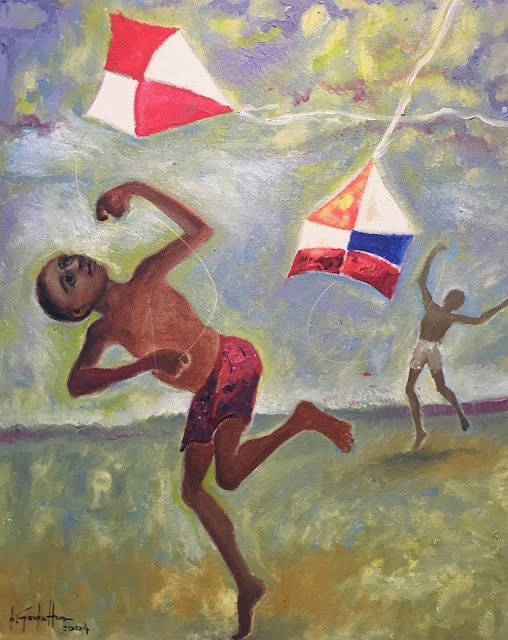 But Kevin warned me.  He’d need the phone for at least twenty-four hours.  This is daunting in the modern world.  No Wechat?  No Di Di?  I sent out a few emails to key people saying I would be soon going dark and to keep it to email.  But my daughter, crafty lass that she is said: “Why do you use the stupid web-based link for Wechat?  It will quickly log you out.  You should use the app from the app store instead.  I see.  And she’s right.  Eighteen hours later I still have Wechat access on my Mac.  But I really don’t know how I’ll make it down to the city and back without my Di Di app.  These days only tourists and bumpkins hail a cab.


Back in Beijing and feeling that wonderful momentary burst of Beijing, as exotic.  The people all seem familiar and the suddenly a whole system of logic that I”veg been imbued with makes sense.  I’m here I’ m home.  A woman asked me the other day at a talk if I was more Chinese or More American and I answered that it was unquestionably the latter and it is.  And it is lovely to be back in my adopted terrarium. The sky is so blue.  There are plumb blossoms and cherry blossoms bursting about.  No dust in the air.  The puff balls haven’t come yet.  They will  But for now my lovely city looks remarkable  They will get there.  Beijing will get there.

I must get my phone fixed. This will mean a day without my phone, surely.  But I’ve not choice.  The mother board, ahas been diagnosed as being broken.  I will need to take it on over to Kevin, the phone-fixer man at the front gate and get it fixed.  No phone for a day.  Can I survive?  How nice to declare myself phone free. 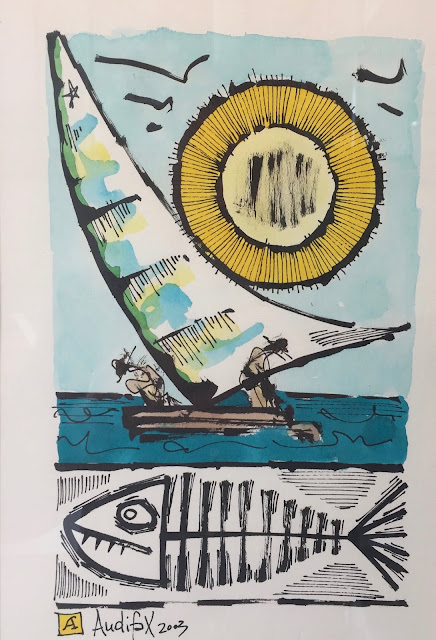 Pleasant driver.  I’m rapping with as I type. He’s from Zhang Jia Kou.  And he wants to learn about me and what I drink and what I do for a living and what parts of China I’ve seen.  I type and we chat. He mentions that Jenny’s, our local market is rather expensive and I agree.

Good To See You


Last night after making my way past the obligatory hundred-yard duty-free dash after airport security I sat in the United Lounge in Sao Paulo’s Guarulhos airport.  Not a bad spread, I laid out some chicken stew and cheese cubes they had and poured myself a glass of their complementary white wine and prepared to have a meal before my flight, in anticipation of the “chicken or the beef” choice I’d soon be presented with in United Economy.  But a message on my phone reminded me that it was morning time back home and there was a scheduled call on.  I took it and talked between bites.

I inquired when I checked in and they informed me that the seat next to mine was still free, which boded for a descent evening.  Upon reaching my seat a young father was straddled into the two seats next to mine.  His daughter sitting in the aisle over on the farthest seat. I got settled and asked if they were a part of two or three?  He confirmed that they were two and said something about making sure his daughter got to bed alright.  I didn’t make much of it though I might have.  I remember what it was like to travel with little kids and feel overly protective. 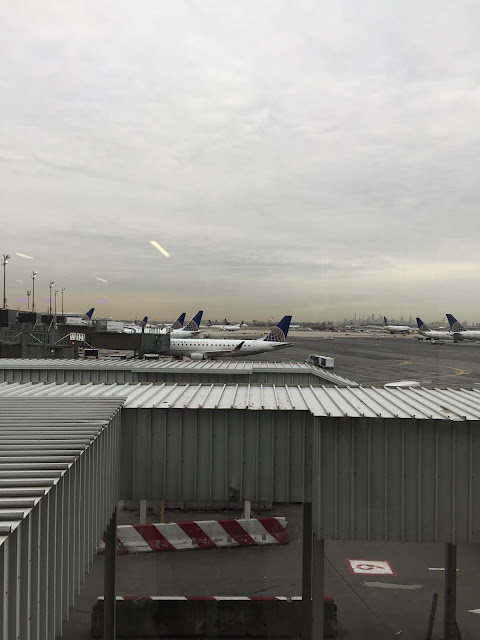 Later his wife swapped seats with him and the space properly opened up.  During the night the little girl, who slept quite soundly, made her way into the space.  But I was fine and could use the space down below easily enough to extend my leg reach which is always the most important thing.  When we were landing I told the lady how lucky she was to have such a well behaved daughter.  And I noticed that as soon as I opened my mouth the husband shot me a glance, half expecting me to somehow be complaining. 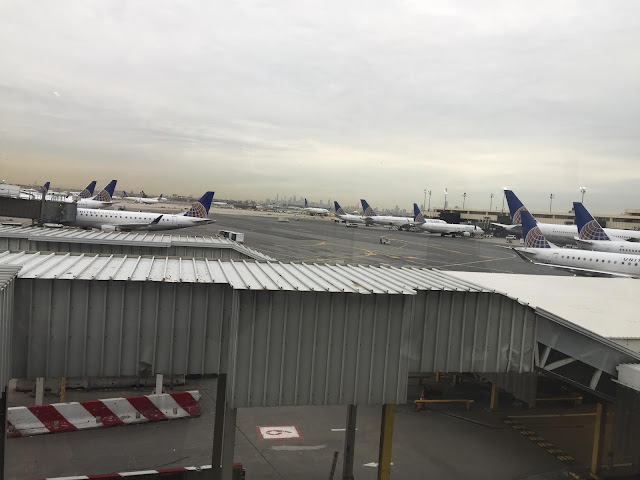 Newark New Jersey.  Good to see you.  Americans now, everywhere.  They seem a lot like Brazilians than do the population at my ultimate destination.  The guys who are to take the luggage for transfer are gruff.  But then I hear them speak Creole and ask “Aye Ay See An?”  Now they smile and confirm they are from Haiti.  I feel safer about my luggage transfer having ingratiated myself with these fellas.  A new lounge.  This is a some sort of portable lounge they’ve thrown up and it sadly doesn’t offer much beyond snack bars and M&Ms.  I give my mom a ring.  She’s only a two hour drive away and it feels as though I’m almost home and ought to.   Dad didn’t pick up.  But a client is soon pestering me and I switch to reckon with it.  Before my next, daunting thirteen-hour flight I start a conversation with charming young lady who is serving up the complementary drinks about a shop she hopes to start one day down in Mississippi.  It’s America, so throw something in her tip jar for the free glass of Champaign she pours me.