No One Can Protect Him


Ahh Leon.  Like the monkey said when the train cut off his tail: “can’t be long now.”  About one hundred seventy pages from the end of this fifteen-hundred-and-seventy-page tome, I decided to make dash for it.  Everyone knows what’s waiting at the end of the narrative for Leon.  No one can protect him from it.  I sat in my chair, leaning forward on my haunches, and pushed ahead to the gruesome curtain call. 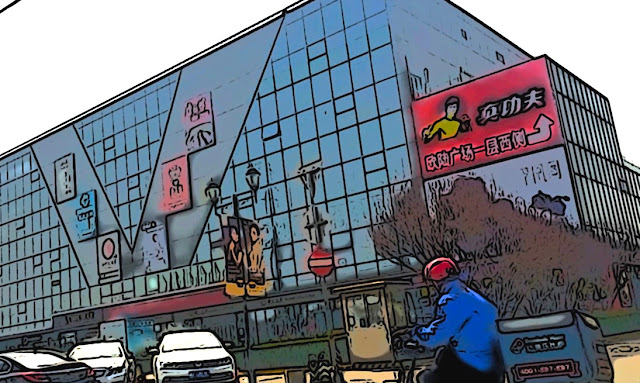 In a manner, not unlike the first otherwise inconsequential meeting with Stalin when the latter was of tertiary importance to Trotsky’s primacy, the author Isaac Deutscher solemnly pauses the narrative when Ramón Mercader, aka “Jacson” first walks on the stage at Coyoacan.  Deutscher would have us believe in one incident after another, that Trotsky and Natalya sense something is not quite right about this fella.

It was twenty-eight years ago, I visited his Trotsky's final residence on Avenida Viena, there in Coyoacan.  I don’t think I had more than a place-holder understanding of the man.  As I probably never really had, until reading this work.  And for all this time, I helplessly imagined the murder weapon to be tong-like device that had two pincers which swung closed to pick up ice and carry with both hands.  Isn’t that what an ice pick is?  I always imagined two simultaneous jabs into his unfortunate head.  The internet is good for all sorts of things including, discerning precisely what an ice pick does look like and it is in fact, more like a hammer with pointed tip, to be wielded by one hand swinging.

And even though ‘Jacson’ was able to drive the tool more than two inches into Trotsky's skull,  he did not kill the tough, old revolutionary upon impact.  Trotsky fought him and insisted that the guards, who eventually came did not kill ‘Jacson’, but rather hold him so he would talk.  Trotsky died a few hours later at the hospital.  I didn’t learn it from within Deutscher's text but apparently Mercader spent twenty years in prison and was then exiled to Cuba in 1961, where Fidel’s government, shamefully welcomed him with honors. 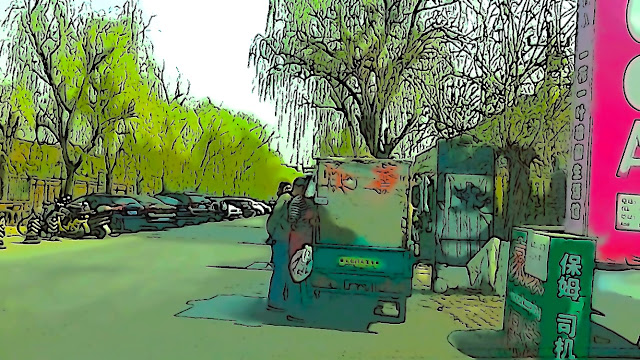 It was four-thirty in the morning by the time I’d finished it all.  Leon the father, Leon the husband, Leon the writer, and the revolutionary, the refugee, the sane voice of empirical reason in the center of Stalin’s hurricane of lies, all these personifications of Trotsky joined me then in my dreams for a while.  I have Robert Service' biography of Trotsky on my shelf as well, and soon I’ll dive in for more.  I know Service is out to take him down a notch or two and perhaps its well-deserved.  I’ll let you know.  But for now, I am savoring the quality of Trotsky's indomitable character in the face of Stalin and much of the rest of the world turned against him.  What a remarkable fusion of intellect, purpose and character, Deutscher’s biography has portrayed.

Posted by John Fargis at 1:46 AM No comments:

And Take Their Picture


A colleague arranged for us to conduct two job interviews at a Starbucks at YinKe Center, the same building we used to work in five years ago.  I can see the Starbucks in my mind and there is a green sign as I roll up but the place in the building where the café should be now has some other establishment in place.  Walking round to the south I find the spiffy new duplex that has replaced what I used to know.

We sit there and talk to one gentleman.  And then another.  I can tell quickly it is unlikely to be fruitful.  I go downstairs to get my espresso and stay longer than I should, talking with another colleague on wechat, watching all the beautiful, young people walk out the office building, to find some lunch.

Back at the interview, I notice an older woman in the corner staring at me.  I catch her eye again and I really would rather not.  She isn’t particularly attractive, I’m not looking for anything anyway.  It is simply an old fashioned annoyance.  There we go again.  Now she suddenly comes over out our table.  Well. Now I can see that she is actually much younger. “You’re were doing job interviews, right?  I am looking for work.”  I appreciate her gumption but we need a pre-sales engineer and we quickly discern that this is not her specialty.  I suggest that my colleague is just the man to talk to her, recommending that she make an appointment to do so.  My colleague flashes a hairy eyeball my direction.  And presently we politely try to suggest we’ll let her know if anything appropriate comes up.

When I leave I grab my back pack.  The straps are now so short.  I adjust them.  Outside I bid my colleague farewell and adjust the other strap, only to realize I’ve left Starbucks with the wrong black back pack.  Not cool.  Trying not to panic I return upstairs and find my bag.  No one else seems to be missing one.  Odd.  I lay the wrong one down, under the table. 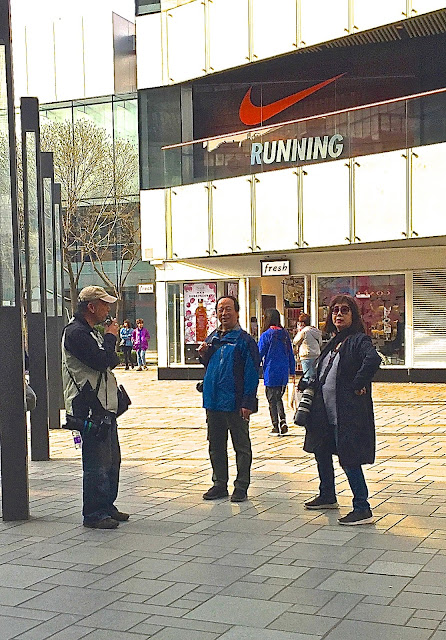 Later I walk through the plaza of the southern section of Taikoo Li.  What are all these horrible older men and a few older woman doing photographing all the young woman with enormous forty pound phallic lenses?  Do they get paid for these real-life, girly snaps?  There has to be some business angle on all this.  It isn’t just for their pleasure, but rather to sell to people who produce cheap pleasure.  I decide to walk up to one and then another and take their picture, which elicits some grunts.   I haven’t proven anything. 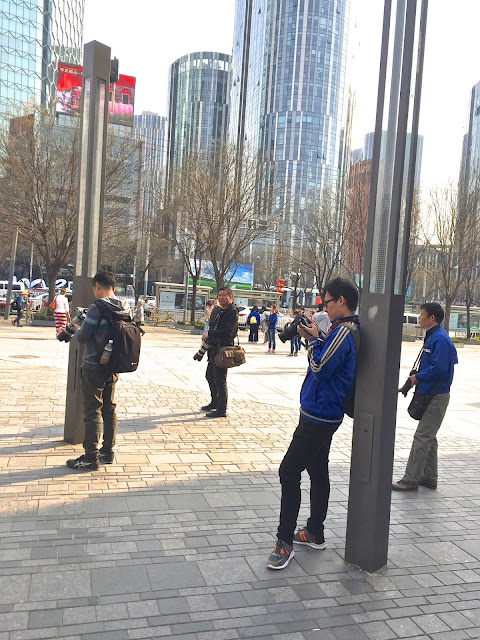 The place where I get my contact lenses is across the plaza and they fix my younger one’s glasses frames for free, which strikes me as particularly old fashioned and kind.   Now it's time to head home.

Posted by John Fargis at 1:34 AM No comments:

Probably Should Cancel It


An appointment for my older one to see a doctor in Lido at 6:00PM.  “You have the car.  Are you on top of this?” I message my wife.  I’m brushed off.  “Yes.  I handle it.”  OK.  Sounds good to me.  I assumed they were long since on their way, when they streamed through front door at 5:15PM.   “Yes, well, I needed to drop things off here.  No.  I’ll need the car tonight.  I guess we should call a car or cancel it.”  Voices rise.  Fingers point.  We probably should cancel it, even though there will be a cost.  But instead, I call a DiDi and look for my coat.   I've decided this is something that will happen.

We are going to be rather late.  This will certainly be the Doctor’s last appointment of the day.  The front desk is closed for the night.  I don’t have her direct line.  I wait and wait on hold at the main switch board till I get a confirm on the street address and ask the lady to forward on the message to our Doctor that we’ll be . . . "about ten-fifteen minutes late.”  We will be much later than that.  But this seems the reasonable hedge.  If she wants to leave before we get there, I would certainly understand and until we arrive, there is nothing we can do. 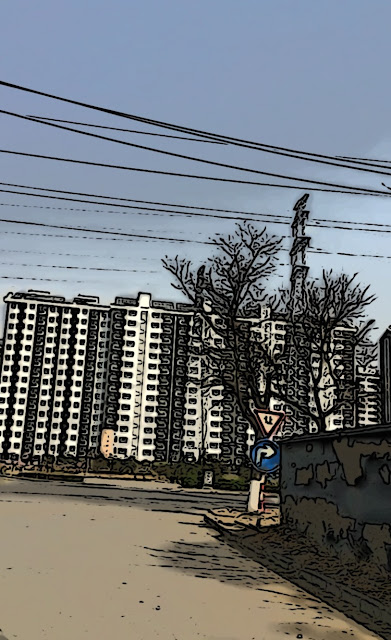 My daughter is lost in music, waxing a Marlene Dietrich’ vibe.  I send her the address and send her the requisite numbers and suggest that next time she manage this herself.  Then I break out my biography: “The Prophet” and tell myself I won’t keep looking at the time, over and over until we arrive.  When we get there, it will likely be closed.  We’ll likely have to turn right around.  And that is OK.  And if it happens I’ll acknowledge:  yes, we should have just cancelled.

Trotsky has been having such a long, steady, dignified, in-spite of it all, descent during the last few years of his life.  He’s in Norway.  Stalin’s insane purge-trials are aflame back home.  Everything Trotsky could possibly be blamed for, the weather, the harvest, the Nazis, are all suggested to be his fault.  The Norwegian government, ostensibly socialist, under pressure from the Soviets and pressure from the Nazi’s has decided to expel him.  He tells the ministers responsible to mark his words:  In five years you too shall be refugees from your own country, once the Nazi’s come.  And not for the first time he is correct in his prophecies.  Later, in exile the Norwegian officials all sadly recall and chew upon, “Trotsky’s curse.” 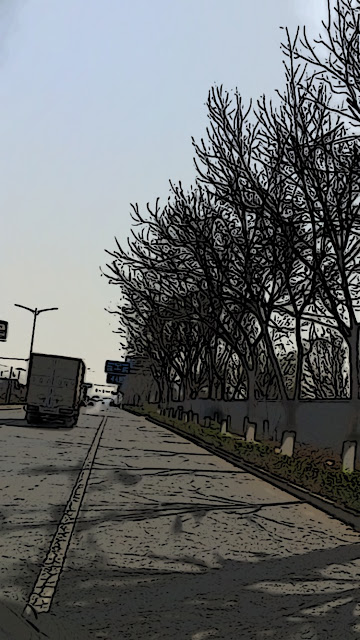 The Doctor waited for us.  Happy ending.  It all worked out.  I shouldn’t have cancelled.  But by now I am very hungry.  There are dozens of hip spots all around this part of town, but Marlene is absolutely not interested.  So we order some burritos by phone, from the return ride home that should get to our place, not long after we arrive.

Posted by John Fargis at 1:17 AM No comments:


I was up extra early this morning.  If I was going to do my gym run, I needed to leave thirty minutes earlier.  My little one had a field trip today into the city, near Gu Lou and she needed to be up at seven and over to school no later than seven-fifteen.  All do-able.  All work-able.  Just start everything a bit early.  And so just before six, with only a bit of light outside, I got my keys and phone and headed to the door.  Leaving I noticed a solitary message on my screen: “the air pollution level is hazardous.”

In the early morning hours, it isn’t easy to discern just how bad things are.  But quickly as one starts off down the road, with swirls of murk spinning before your headlights immediately clear that ever more daylight will simply reveal a terrible, polluted morning. 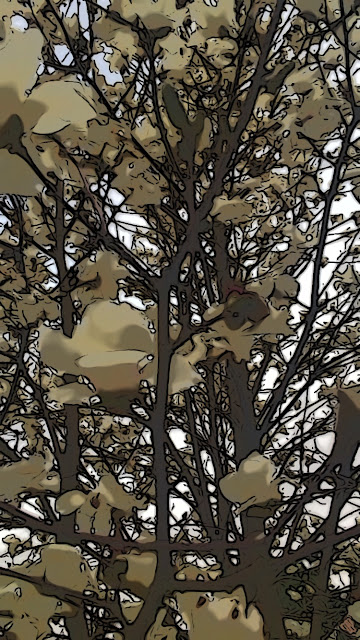 As in some pathetic, futuristic space colony, our school has an air locked environment.  The gym has purified air, so I can forget about all this for a while, as I exercise.  Heading home forty minutes later this Wednesday has revealed itself to be a thoroughly wretched, day of intense pollution.   My home, where I'll be for most of the day, is not air locked.

It has to be said, that even during the days of the Emperor Kangxi, Beijing, with its “perfect” feng shui, mountains on three sides, on the edge of a desert, is also a perfect trap for the dust storms of the Gobi desert.  No one was burning coal or revving their engines when the YongLe Emperor broadcast China’s ascendency to the world, from his Gu Gong throne, but these storms happened in the fifteenth century just like today.  Dust blew in and settled here making life unpleasant. It goes with the territory here in the northern capital.  But where as those storms picked up lots of all natural if nasty detritus along the way, one can only imagine that this thick strainer is dragging along a cocktail of chemicals and pollutants from yet-to-be-controlled, polluting provinces over the hills, outside the capital. 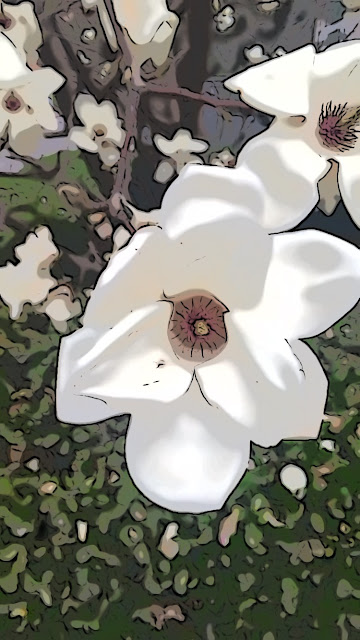 I took my little one to school.  I gave her a mask to use, while she was on the trip.  By the time I got home my wife informed me that the trip had been cancelled.  They all have to go some  other day.

Posted by John Fargis at 1:10 AM No comments: