Visiting a new city during the pandemic.  We arrived at the Buffalo Westin and pulled up against the curb on Delaware Ave.  No bell hops, no valet, I figured I’d be alright to double park and head in for a look-see.  There was no one at the desk.  I knocked once and then twice at the staff door.  Then I walked around.  By the time I returned a smiling young gent emerged and told me all about how it was going to be.  He checked me into a room, which as he described it sounded like the FDR suite, but which, in fact turned out to be a rather every-day perch.

My wife and I wanted to walk around in town.  The little one thought this was all rather dangerous and unnecessary.  I’d spoken to a colleague and gotten a recommendation to Oliver’s, which was just a bit too far to walk to, but was promised to be a rather wonderful, if expensive joint, so the little one ,staying in the hotel with room-service pizza was OK with me.  A few blocks away was the widely lauded bar, Marble and Rye and my wife and I walked down along Chippewa St. (the mind turns to the lyrics from the "Wreck of the Edmund Fitzgerald") to Genesee St. (which brings to mind cans of New York State beer) only to find that our destination was closed for business.  We ended up in another wine bar, halfway back home where the bartender explained that they might be shut back down in a few weeks as cases were climbing

The evening was wretched.  I had early calls and the late-night TV-viewing was inconclusive.  Biden hadn’t yet won.  We all had to kvetch and wonder.  Up early on calls, everyone from every country I work with was asking me: “Gee John, what does this mean?”  As if anyone knows.  At five AM, I was trying to be professional but wanted to be confessional and by 7:00AM it looked a bit better but it was still unclear.  We went off and checked out the hotel and then set the GPS for points of Buffalonia. 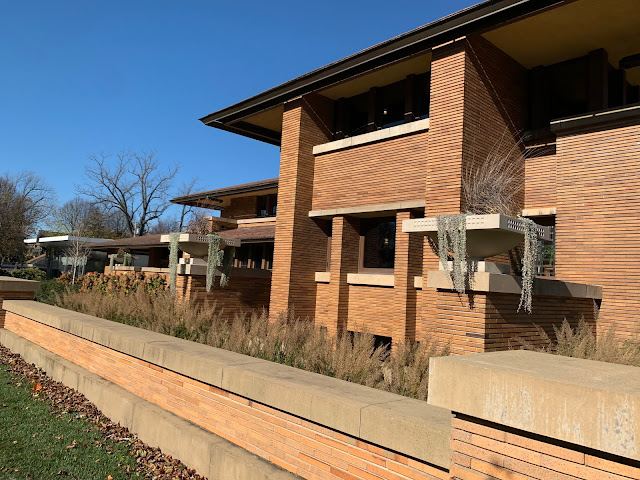 We saw the City Hall completed in 1931 and one of the tallest in the country.  There were two or three other remarkable buildings from the late nineteenth and early twentieth century, when this polity was its height, and then we rode on up and out from downtown, and off the freeway and on to Jewett Parkway, where, a few blocks further, behind a majestic copper beach tree lies the Frank Lloyd Write building “The Martin House.”  We walked about and considered the absence of space and the deliberate approach to gardens.  Then on towards Olmstead’s sanatorium built to afford the mentally challenged a facility of distinction to raise their spirits.  Lakawanna is a place I might have recognized the name of, but would have been in askance if pushed to specifically identify it  No more.  Lakawanna is where the Buffalo Erie Botanical Garden is located and it seems a fine little place, from all I could tell, though we took it in from the outside. 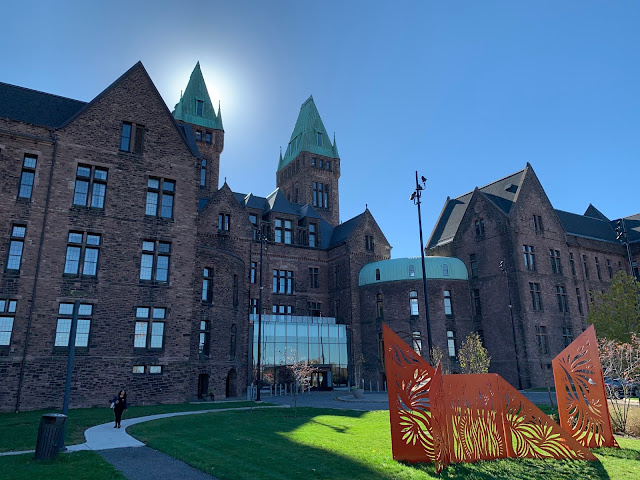 With that little trot through the big Buff-a-lo, we headed home.  The Mrs. commented that she was a Buffalo fan with all the park land and use of water front. Departing this time it was all about the straight shot out Highway 90, towards Albany and then the New York State Throughway, 87 down home.  It was, as advertised, rather flat and boring, especially after the multi-estuary grandeur of Route 17 on the way up. But we made good time.  And when we were home in New Paltz we all felt glad to be here.