In A White Frosting

Friday very morning early.  My team has already spoken on a weekly call and I’ve idle time as another group provides their update.  I gaze at the New York Times and the Washington Post and the SCMP and the Huffington Post and Slate and Politico.  All I really want to see is are articles confirming my hope that there will be a landslide in favor of the Democrats.  My sister reminded me of my misplaced confidence in the last election.  I want it to work out alright.  My way.  I arrange things to justify that.  I am aware of what I’m doing.  And while the news does look “good”, and there is reasonably strong reason to believe a positive change is coming, it is shocking, how many people could really consider Donald Trump as someone they believe in.  Someone they think has done anything positive for the country.  Someone who has a plan for anything, beyond himself.

Reading more about how the Choson Kingdom was so strict in their interpretation of Neo Confucianism, in a manner not unlike what happens later with Christianity and certainly Marxist Leninism. Unerring devotion, over time that doesn’t fade out.  The vision of Korean travelers going to China and being on the one hand impressed with all the wealth and sophistication of the Kangxi and Qianlong periods.  But at the same time they derided the Chinese who had to wear Manchu fashions like the queue when the Koreans proudly kept to their Ming Dynasty attire.  Interesting how that fetishization for the pure, original version of ideology, plays out in the DPRK. 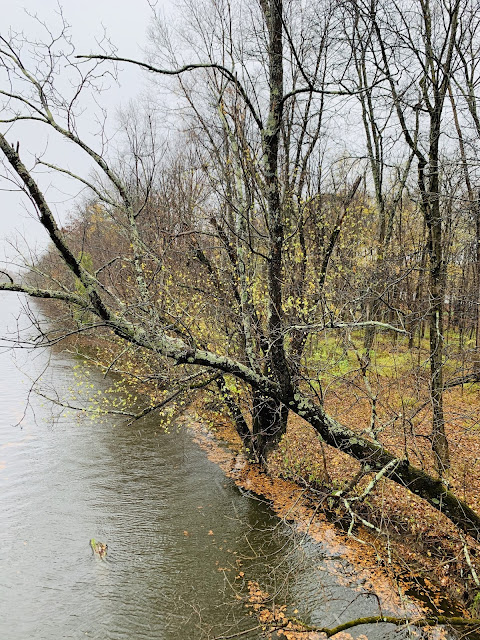 When I got home, the snow had formed a fragile cover.  Coming back along Route 32, in the field across from the police station was now completely white.  For the first Friday morning in two months or more I had no hiking plans with my dad.  His community is on virus lock-down and he can’t meet up.  I was burning to get out in this snow but there were still many work matters that needed to happen, and one at least, that beckoned for, now.  Dutifully, I sat and took care of the sheet I had to update.  And looking outside as I went, I vexed. Soon, the snow would clearly turn to rain.  I dashed out finally and flakes were falling, but by the time I commenced to bike north on the trail it was clear that whatever cover had been here before, was now gone. Only sections of fields, still showed anything white.

We set off for Kingston to get our car looked at around noon.  Because I’d biked north, I hadn’t spied the Gunks and now I could see that only just a few hundred feet up in elevation, the mountains still held their snow cover.  Later, up at Prestige Toyota, we had an uninterrupted view over to Slide Mountain in the Catskills which was completely covered in a white frosting.  Others were complaining but I was so glad to see the snow all day, so early in the year.  We had an hour or more to kill, for the inspection and we walked over to the Augustine Nursery, down the road and thought of same-named Saint and his fervent prayer to the Lord for more time, just a bit more time to enjoy all this wonderful sin.