I’d had a rainy walk, through Franny Reese Park, last fall.  It’s a beautiful piece of land on an old estate that would otherwise be a mall or a business park if Scenic Hudson, who were also responsible for saving Storm King from being turned into a pumping station, hadn’t successfully fought to have it converted into a state park.  Thank you.  Walking on the bluff above the river it was clear that there would be remarkable views in the winter, once the leaves had all fallen and my dad and I met there this morning for our Friday AM ritual hike.

I’ve viewed this piece of land ever since I can remember.  It is the long stretch of wooded shelf one sees across the river from Poughkeepsie.  But only today on this second time in the land does one appreciate the epic view in the other direction.  There are steep slopes a half a mile down to the water’s edge and a panoramic sweep across to the shoreline I’ve traveled along hundreds of times but never really viewed in this way.  I think the lack of trees also affects the way sound travels.  I drew my dad’s attention to the constant hum of traffic, which permeated the woods.   I don’t usually think of Poughkeepsie as a throbbing urban hub, but that’s what it sounded like, absorbing the dull roar from the west side of the river.  I remember that hum from having lived a stone’s throw from the great Williamsburg Bridge. 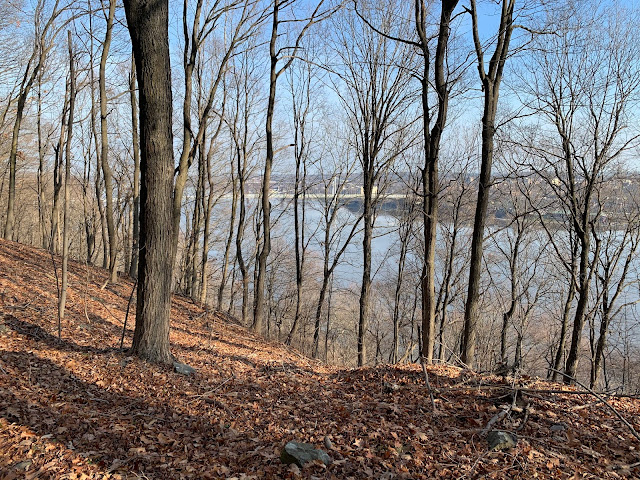 He wasn’t so sure about it, but I talked my dad into walking down the additional trail they have in the park to the bluff up over the Mid-Hudson Bridge.  Nothing dull, about this roar.  Routes 44/55 swing down through the same mountain rock we’re standing on, dynamited out in the late twenties when they built this bridge.  And you can follow the cut down below the bluff out on to the bridge itself.  I filmed a tanker being pushed up slowly under the bridge and talked the old man into a few selfies out by the edge of the bluff, beyond the guard rail. 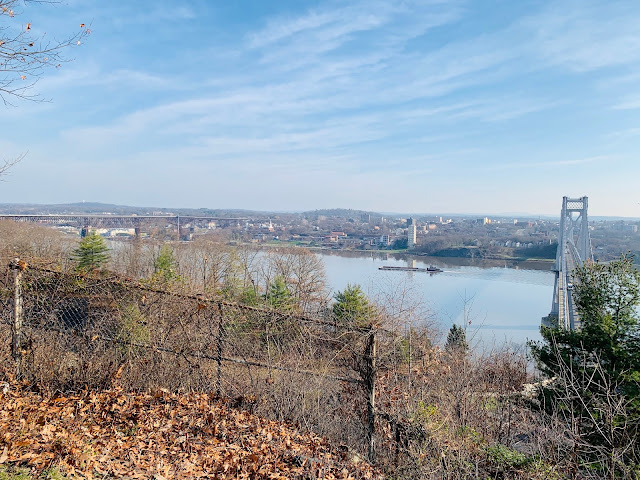 Later that afternoon the older one and I went up to Aldi’s in Kingston.  I enjoy shopping there.  Good variety, good value.  And the clientele seemed to be heavily tilted towards folks without means.  A grandmother was yelling at a little girl.  A father was picking out a frozen pizza with his son.  And I thought, as I shopped about the America that no longer seems to represent opportunity, for so many, but rather stasis or indeed, decline.  A woman wanted to take the cart we weren’t using, which was fine with me but the cashier wanted her to go around the other way.  They were both course and they both yelled at each other sharply, oblivious to me and my daughter.