Nordic In A Word

I wrote it down so I wouldn’t forget it.  My dad wanted to go and meet up this morning, as we usually do on our Friday’s and head up to a trail head.  This time he had suggested we meet at Minnewaska and walk up towards Lake Awosting.  I’d heard of this lake, but had never seen.  My dad warned me yesterday and again this morning when we met up at the parking lot that it was a long three mile schlepp up and he’d likely want to turn around before we got there.

It was lovely as we set out with all the pine needles frozen over with a thin frosting and the Peter’s Kill creek bubbling along off to the left.  The carriage road trail is broad with an easy incline and only in a few places was it slippery and iced over.  Everywhere is the hot green of hemlock needles and the stark white of leaning paper birch trees.  Wooded trails can often become dodgy in the winter, concerned as I am with my father ambling over boulders and stepping through riverbeds in the best of weather, days like today would be slick and dangerous.  The carriage trails make it all rather straight forward. 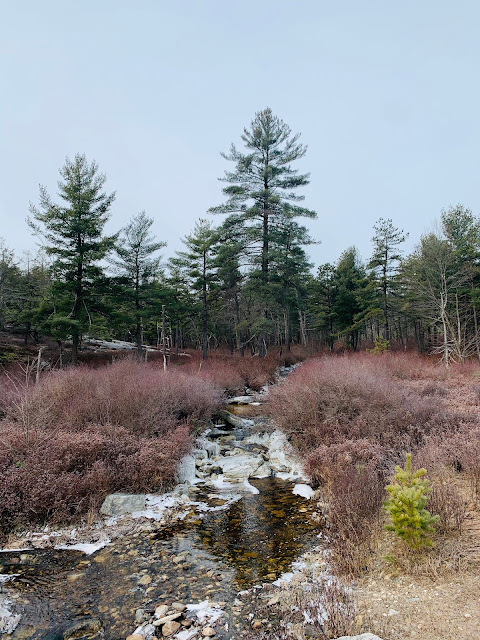 And though three miles isn’t much of a distance, it was longer than we usually go.  By the time we came to the “dip” in the trail my father had been predicting we were only another half a mile from the lake so he voted to continue and I was glad he did so.  The first real exertion of the voyage happens on the incline up to the lake after this creek crossing dip and then, there we were, with the lake before us.  As we walked down towards the shore I was started to hear and feel in equal measure the sound of the lake groaning as the ice shifted and cracked.  Primal that sound, for even though I was not standing on the ice it still felt dangerous to hear that enormous, deep cracking sound. 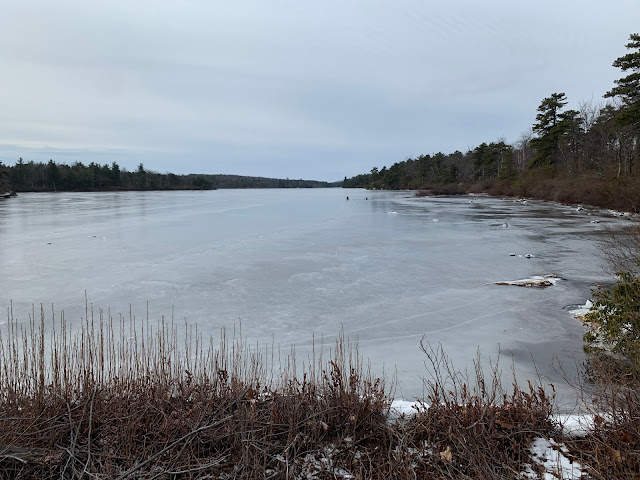 Austrian schlosses, Norwegian fjords, Icelandic sagas, like Njialls’ where Njáll's son Skarphéðinn kills Þráinn sliding by with his axe on the ice.  Something pure, austere and martial, Nordic in a word, comes to mind staring out at this frozen lake up on the top of a mountain bluff.  The air feels pure.  The water seems pure.  No one is around and there are many, many trees which the beavers have eaten through and toppled.  Across the lake are cliffs over which water usually falls which are today frozen, as a spill of icicles that hang in the air.   And all the while we talked and talked about all the things we usually talk about and it was a fine day, even if we were out for much longer than we normally go.  Neither of us had anything else to do today and it was grand.   Happy New Year, people said, as we passed them on the carriage trail.