Phone Into the Ripe

Not far after the bridge over Boppys Lane and that Walkill River tributary that runs off towards the Gunks and the remarkable sycamore tree, standing there in the defiance of the water’s path, you reach the Dressel Farms apple orchard.  The trees, pruned low were beginning to sag with apples and there’s patch of brambles there that have been spared by the mower and today I pulled over to have a walk around. 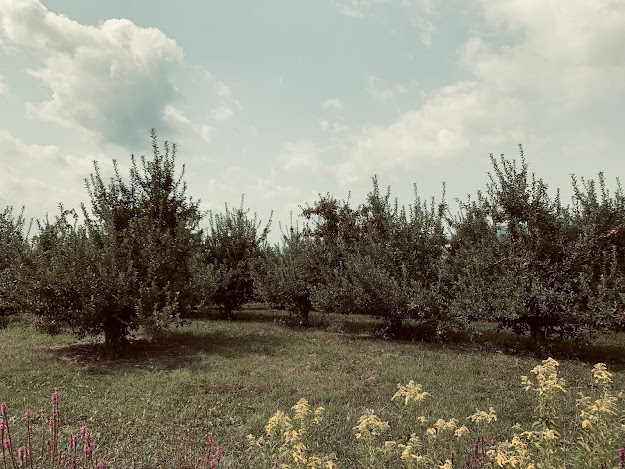 A family of bicyclists stopped forty yards back from me where the trail crosses a dirt road.  It’s a private road that crosses the public trail.  Driver’s probably from the farm.  They’re probably gonna tell me to get off of their property.  But the driver rolled down her window and politely told the family that she was probably going to kick up a lot of dirt when she went by and they might want to back up from the roadside.

I found a few new things in the hedges, Wild Cucumber, which didn’t seem to have anything cucumber-like dangling off it and a straw-like grass called Yellow Foxtail.  There were lots of bees skipping about the purple loosestrife and the goldenrod and a score of lovely black and yellow butterflies, which my app suggested were Meadow Fritillary. 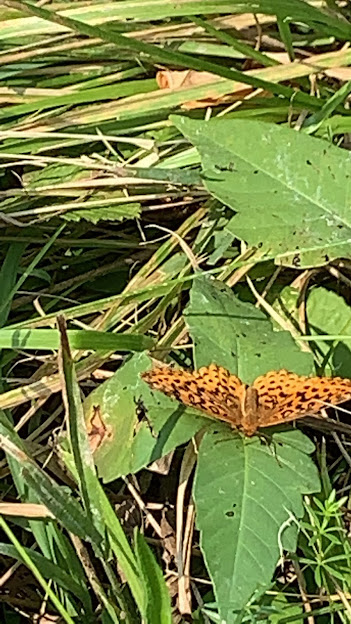 By now I was squarely on the property of the orchard.  And I couldn’t stop imagining the driver returning to ask just what I was doing near her trees.  Still, I was eager to have the app tell me precisely what kind of apple tree this was.  There are a few different crab apple trees growing along the trail but Johnny Appleseed tossed out anything else discernible.  I stood there, pointing my phone into the ripe red apples.  The app told me it was an apple tree, but it couldn’t tell me what species.  I stood there for a while, moving the camera around, listening for a car,  wondering if the itchy feeling on my calf might not be a tick.  It wouldn’t tell me what kind of apple tree this was and I returned to the path and biked home.