Do you know where Johnson City, New York is?  I didn’t either, till I got a speeding ticket there.  Cop pulled me and my daughter over on my way to Buffalo about three weeks back.  Very polite, very efficient.  They sent me a form asking me if I pleaded innocent or guilty, suggesting different next steps depending on how I might respond.  It sat on my desk for the last week or so and although I knew exactly what I was going to do, it was only today that I checked the not guilty box and drove down to the post office, bought one of those envelopes with the stamp already affixed and sent my reply off to the folks in Johnson City, which is right out of Binghamton, heading west. 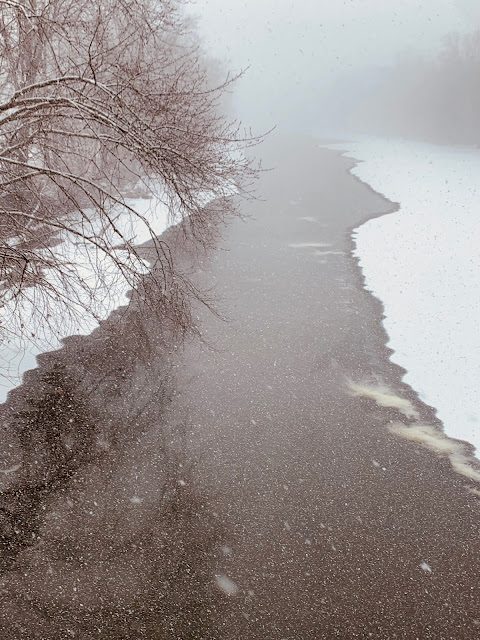 While I was out, I picked up some spinach and some nan at Tops.  I’d had it in my mind to make some Indian food tonight.  The young guy who rang me up at the check-out had another fellow there on bag-duty and they were chatting about football.  On the airwaves was Duran Duran’s “Her Name is Rio” and I was transported back to being fifteen years old or so and hating this song so intensely. But what was her name?  I thought about this idly for a while.  “Her name is Rita, no,  Minnie, . . . ?”  And then it hit me that Rio herself, is who is dancing in the Rio Grande.  Unsolicited, I mentioned something about horrible music from before they both were born that was playing on the airwaves to the two young gentlemen who were helping me with the checkout.  Presumptuous, certainly.  Perhaps they thought it was ‘vintage.’  They may bag away on the day-shift with the fervent hope that old Duran Duran and Flock of Seagulls songs will hit the airwaves before their break.  I gazed at the one guy bagging.  He wasn’t that young, but he piped up quickly and clarified that yes, he was born in the 90’s.  The other lad scanned my Tops card and mentioned that his parents also hated Duran Duran.  Good.  A quality family, that.

At the post office, when I bought my stamped envelope it was sixty-nine cents, all told.  I only had twenties in my wallet and I asked if he preferred a big bill or charge.  “Charge.”  Right.  Sure.  So, I did.  Unsolicited, I suggested that sometimes you wonder if a charge will go through, but not in this case.  Yeah.  Sixty-nine cents.   It fell flat.  I thanked him and went around the corner to pen in the address of the court, there in Johnson City. 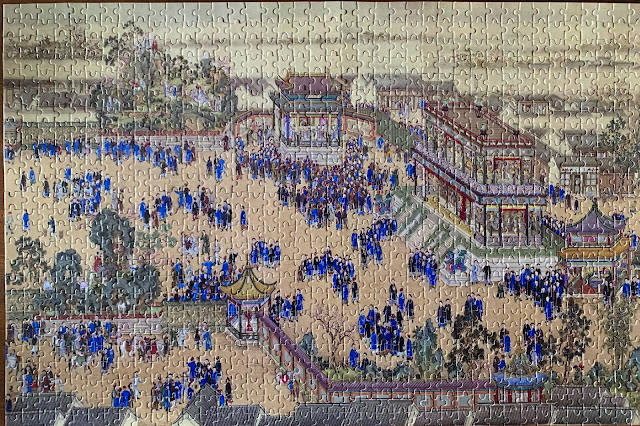 From Saturday morning I’d been working in earnest on a new puzzle: “Minister of The Qing Dynasty”, a one-thousand-piece puzzle, I’d bought on Amazon.  Alas, this is the second such puzzle I’ve gotten online, that are cut professionally enough but provide no information whatsoever about the print, inside.  On the back are letters which make assembly easy.  Too easy.  This one had sat around, simply framed and undone for a while.  I started in on it, in hopes one or the other daughter would eventually become interested.  And finally, just after noon I lured my older one into finishing it off with me.  I’m not sure we’ll ever run into this painting in the wild.  I’m not quite clear just how one might to track it down as it doesn't appear in searches under that title or obvious analogs.  Regardless, the scene is marvelous and the air is that familiar dusty Beijing ochre, reminding one that Beijing has always looked this way.