Completely covered in snow this morning.  It looks wonderful.  The birds knew to look beneath my window even before I threw anything new out. So did the deer.  It’s cloudy, but the temperature has risen up above freezing and it has all started to disappear, slowly.  I was on calls all morning and by the time I went out at ten or so my wife had shoveled out the car and created a trapezoidal shape in the middle of where you’d turn around.  Too large for a snow man, I asked her what she was up to and she reckoned she’d put a planter on the top of it. 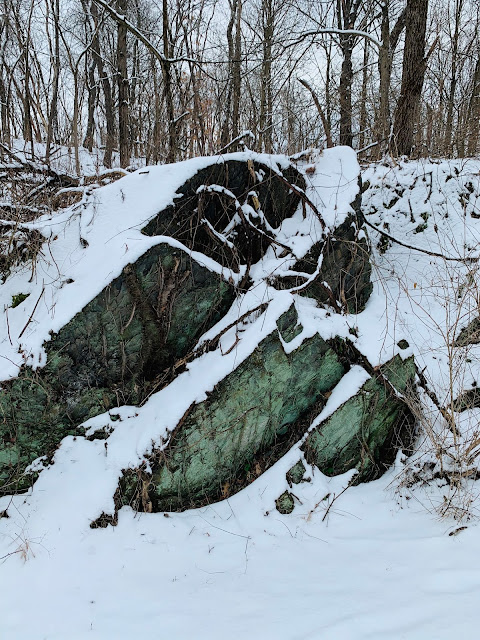 Fresh snow and thirty-six degrees Fahrenheit means there is a fleeting chance to cross country ski down on the trail.  I trumped down through the backyard, out under the fallen tree and on to the trail to find it unmarked besides the fat tire of a bike trail and some deer tracks.  I have mastered the initially illusive art of getting the bindings to click in, thought back and confirmed that I had done some stretching this morning.  Up above the thick grey clouds were breaking blue.  I decided not to put on any music.

Setting off, I headed north, lugging distinct calve and thigh muscles that haven’t had any call to duty for a while.  There’s a well-earned ache pending.  At first, I measure motions in sets of ten kicks and then a slide.  Now I increase it to twenty and so on.  Not sure why but it takes time to get into the rhythm this strange motion. Eventually I crafted a meandering bass line in my mind that counted every fourth step with a planting of the pole and proceeded ahead with sets of one-hundred, which seemed to eat up the time nicely.  Returning I passed two young ladies to whom I said “hiya” and one answered “nice,” which I optimistically took to mean that I’d been awarded and ‘A-for-effort’ despite looking rather old and clumsy. 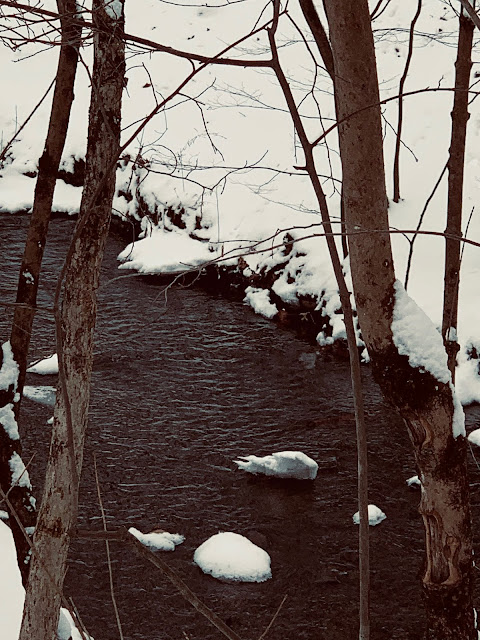 Yesterday afternoon both the girls plopped down here in the study.  And they weren’t here for any reason.  They were just here to talk.  The little one had a tune she was singing with a trio of la’s, “la la la,” which couldn’t help but make me want to put the theme to the Banana Splits on.  An infectious tune unarguably, I noticed as I clicked on the link that it was from the “1968 series . . . “ I would have been two years old or not much older when this “making up a mess of fun” first entered my noggin.  I can’t remember any of the characters, any of the plots, much of the premise behind the the fact that men were dressed in teddy bear-like monkey suits, but that tune.  I have it tattooed in my cranium.  I air drummed, drew attention to the break and the hook.  Mentioned that a punk band had covered the tune (I had, at the time forgotten that it was the Dickies).  And with that turned it off and returned to our chat.   The tune I sang to myself while I wasn’t skiing wasn’t much like the Banana Splits song, mind you, but it reminded me of that chat yesterday, nonetheless.