Knots of a Single

Friday morning ritual to meet up my dad up in the Gunks.  I’d ordered a used book on my dad’s recommendation which I decided to finish off this morning in anticipation of our walk up there: “The Northern Shawangunks, An Ecological Survey” by Erik Kiviat. It’s only a hundred pages long with a lot of pictures and tables.  Written in the eighties, it had a homemade quality that was at one and the same time cumbersome to read and endearingly personal to flip through.  Now I know that those strange looking pines on the tops of the gunks are rare pitch pine barons.  Now I understand there may be some small patches of old growth hemlock to consider by the cliff-sides.  There are other sky-lakes, I’ve never heard of.  And the wonderful naturalist my father introduced me to a few month’s back, Paul Huth, is quoted extensively in this book, on matters of local botany. 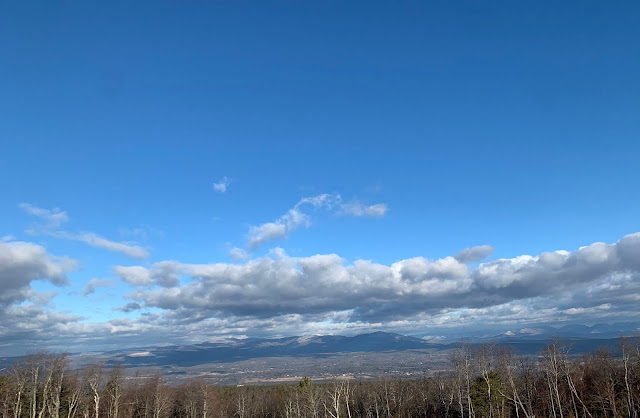 I brought the book along and some plastic flowers my dad said he wanted, a book of Li Shangyin’s poetry that had just arrived and made myself ready around eight to head up to meet him at the Minnewaska upper parking lot.  In the other room I heard my wife, clearing her throat, a morning ritual.  She isn’t normally up this early and I brought her some coffee and invited her, as I had last night,  to join me this morning for a walk around lake Minnewaska.  And without too much fuss, she decided to come along.

Uncharacteristically early this morning.  I’ve been late eight out of nine times we’ve rendezvoused.  But this time we were ahead of time and with no one save a park ranger in a pickup in the parking lot we sat back and admired the extraordinary view out to the Catskills off in the distance.  Many of the peaks were covered in snow and the sky was bright blue.  It all looked magnificent.

Dad showed up and we snapped some photos and made our way to the carriage trailhead which was completely covered in ice and snow.  I don’t think it had occurred to any of us that the path would be iced over and impassable.  My father tested the road and wisely piped up that it didn’t seem safe.  My wife needed no further convincing and a quick chat with the ranger confirmed that all the trails were like that and that it would be slow going in any direction.  We enjoyed the guest house bathroom and the diorama of the park they have laid out, some of the stuffed animal representations, the fisher, the twin timber rattlers, the old photos of Wildamere.  But by now it was clear we’d need to  go somewhere else, somewhere down out of the Trapps, where the snow was already long gone.

Later we parked in the head of the River to Ridge trail, just outside of New Paltz, there by the Wallkill River.  I’d always wanted to see what the river does on this western side, after it vanishes along old Huguenot Street on the eastern shore.  I guessed that all those mighty trees, growing out like knots of a single purpose were those riverside silver maples that you see further down on the trail by the bridge over the Wallkill.  We were three on a broad carriage road and I saw a lady approaching and I bid her good morning.  Her reply was “move over.”  It took me a pregnant pause to realize that she wanted us to give her space on the trail and that she hadn’t asked, she’d demanded.  My father and my wife were oblivious, but I let out an audible “Please!', and vexed about this slight needlessly for the remainder of the walk.