On The Frozen Covering

Cross-country skiing is more enjoyable when you know how to put the skis on and off.  This is true.  I had been given a terse lesson from the disagreeable gent at Rock and Snow about how to get the bindings to work and though I was doubtful, and it still was not turn-key, I managed to get the bindings to click once and twice today, standing in the snow on the driveway and figured I was facile enough now to brave heading down to the trail again.  The last time I did, I had to retreat back up home having fumbled around without getting the skis on in the cold and snow.

How far should one go when one cross country skis?  The trail was still full of thick powdery snow so the conditions were just right and by now there was a fairly well-worn path I could follow if I choose.  When you downhill ski, you simply hit the trail hard till you get hungry and then again till it gets too dark to take another run.  But cross-country skiing isn’t something my body knows in its bones.  I still fumble with the motions.  Last year when I tried, I got over my skis as they say and nearly pulled a strained tendon in my knee.  It occurred to me I hadn’t really stretched as I’d told myself I ought to have, by the time the I had both bindings clicked on. 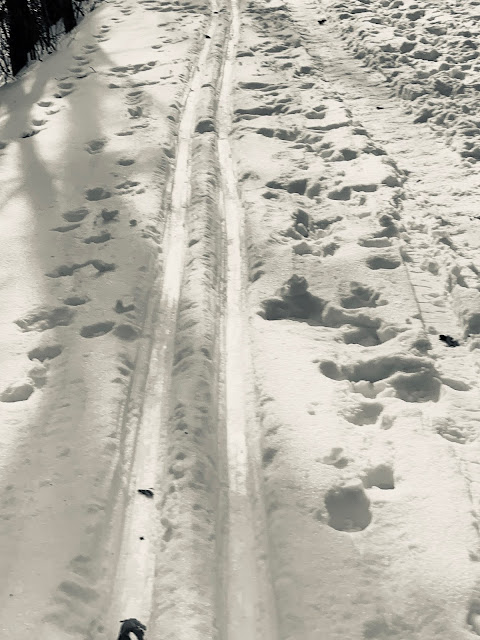 I set out along doing motions of one-two-three-four-glide-a-bit.  Did it again and again.  Then I did one-two-three-four-five-six-seven-eight-and-glide-a-bit for a while and just as I was feeling modestly okay about myself a guy came up from behind and passed me, going at a crisp clip.  Perhaps his skis were better waxed.  He seemed to glide along effortlessly.  I imagined my own Frankensteinian motions and was suddenly self-conscious. 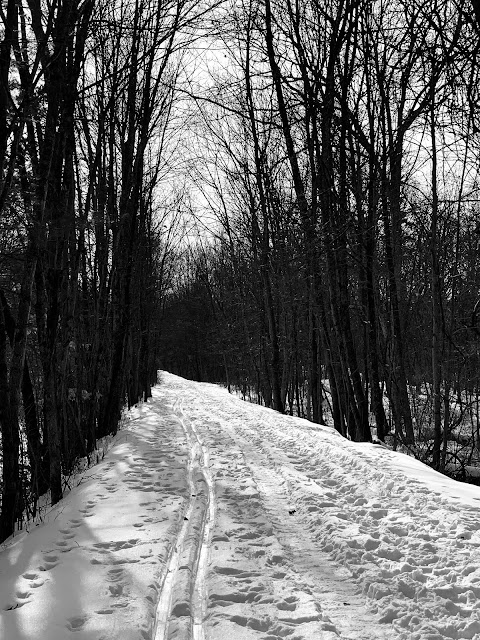 Normally when I bike on the trail, I go out about twenty-five minutes and return back home.  I don’t know why I settled on this fifty-minute routine instead of something sixty minutes long.  It certainly has everything to do with the point in the trial I’ve marked as the turnaround point.  I no longer ever consider the time.  So today I slushed along further than I thought I’d make, and told myself, continue on for a full twenty-five minutes.  When twenty-five minutes are up, it will be time to turn around.  And this now seemed like the right thing to do.   I passed some people standing on the frozen covering over the stream after fumbling to get my mask on.  Fortunately, I didn’t run into any other skiers.  And before long I was nearly all the way down to Plaines road, which is much further than I figured I’d make it.

That night at home my calves had a wonderful if humbling ache that suggested they were calling out to be used again that way.